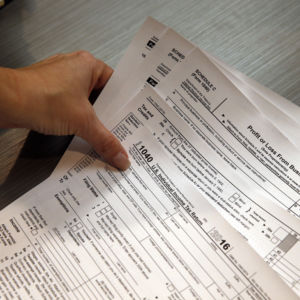 What Could Happen If State and Local Tax Exemptions Are Taken Away?

Democratic Sen. Martin Heinrich warned Tuesday that rates could increase for millions of households if state and local tax deductions are eliminated as part of a new tax reform plan.

Republican leadership revealed its framework on Sept. 27 for how the party hopes to reform the tax code. The framework has been rigorously scrutinized since its release to determine its likely impact. Some have found it will generally help everyone by boosting economic growth. But others warn it will only really benefit the wealthy and large corporations.

Heinrich currently serves as a member of the Senate Joint Economic Committee. He argues that 40 million households will see their taxes increase because the plan threatens to eliminate what are known as state and local tax (SALT) deductions. SALT deductions allow taxpayers who itemize to deduct some of their local taxes on their federal taxes.

“The SALT deduction ensures Americans are not taxed twice on the same income,” Heinrich said in a statement. “These deductions include write-offs for state sales, income, and property taxes. By eliminating the deduction, working Americans will face tax hikes costing hundreds or even thousands of dollars.”

Heinrich adds that the state and local deductions are a nonpartisan issue with both red and blue state families benefiting from them. He notes that the deduction prevents working families from getting taxed on their income twice which helps save them money that they can invest back into the economy.

Republicans hope to lower rates and simplify the tax code in order to spur economic growth. The framework provides a good look into how they hope to do that. The framework reduces the seven current income brackets down to three and reforms some deductions. Republicans are also looking to reduce rates for middle and upper incomes earners along with businesses.

“Families across the nation enjoy much needed tax relief from state and local tax deductions,” Heinrich said. “The SALT deduction also reduces the cost of home ownership, by allowing for the deduction of property taxes. Removing the deduction would increase the cost of owning a home, which could have a substantial impact on the housing market. Similar Republican tax proposals have been estimated to cause drops in housing prices of more than 10 percent.”

The National Taxpayers Union (NTU) has been optimistic of the new framework since it was released. NTU executive vice president Brandon Arnold notes there are still some details to work out, but it’s a step in the right direction. He argues that state and local tax deductions have been abused by some local governments to offset their high tax burdens.

“I think one potential loser would be high tax states that have effectively allowed the state and local tax to raise their own taxes and become high tax states,” Arnold said in a recent interview with InsideSources. “They know they would block the effect of those increases through the federal government essentially picking up part of the tab. They may have to go back to the drawing board to figure out how to fund their state obligations in a more fiscally responsible manner.”

Arnold suspects that lawmakers are going to be under a lot of pressure to keep the deductions. Republicans that are in blue states have already spoken out against the change. Arnold notes there are a few other sticking points which could draw in various special interest groups that benefit from the current tax code.

The framework reduces the top individual tax rate from 39.6 percent down to 35 percent. The framework also includes a number of provisions for businesses with the aim of spurring economic growth. It promises to limit the maximum tax rate for small and family-owned businesses to 25 percent. The framework reduces the corporate tax rate to 20 percent. Corporate income is taxed twice at both the corporate level and then again when money is paid as wages to employees or dividends to investors. Many economists believe reducing the corporate tax burden to line up with other countries will enhance economic growth.

The framework taxes middle-income earners at 25 percent, and lower-income earners could see a slightly higher rate at 12 percent. It does leave room for lawmakers to add an additional rate for top earners. It also promises to eliminate some deductions that help the wealthy while increasing others that help middle-class families.

The Wall Street Journal notes that the question of who benefits from the tax framework has become a fierce debate among experts. The wealthy are likely to start feeling the benefits first, which is why investors should care about the plan.