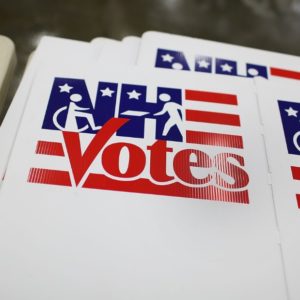 A DC-based progressive group is backing a lawsuit forcing New Hampshire to count ballots received up to a week after Election Day.

Democracy Docket, which describes itself as “the leading platform for progressive advocacy and information about voting rights, elections, redistricting and democracy,” is behind a lawsuit filed by the American Federation of Teachers. The organization was created by Marc Elias, who was Hillary Clinton’s 2016 campaign attorney, and has launched a series of similar suits across the nation pressuring states to change their voting rules as the November election approaches.

The New Hampshire case was heard on Thursday by Hillsborough County Superior Court Judge William Delker. At issue are the state’s refusal to prepay the postage on absentee ballots; the requirement that ballot drop boxes must be “staffed by a properly trained election official,” and that mail-in ballots must be received by 5 p.m. on Election Day.

Instead, the lawsuit suggests “a substitute procedure of requiring absentee ballots to be postmarked on or before Election Day and received by the town or city clerk within a reasonable time after Election Day to be counted, approximately five business days, resolves the inequities inherent in New Hampshire’s Election Day Receipt Deadline.” [emphasis added]

Under this plan, ballots not received by the town or city until the Tuesday after the election — a week later — would have to be included in the final tally.

Elias’s group was part of a similar case in Pennsylvania, where the state Supreme Court recently ruled that ballots postmarked by the time polls close on Nov. 3 and received by county election boards by 5 p.m. on Nov. 6 must be counted.

In an even more extreme move, the court said that ballots without a postmark or proof of mailing must also be counted, unless a “preponderance of the evidence” shows they were mailed after Election Day.

Elias, who took to Twitter to celebrate the Pennsylvania court rulings, has deep, partisan ties. His law firm hired the opposition research firm Fusion GPS on behalf of the Clinton campaign to gather the information that appeared in the now-discredited Steele dossier used to launch the debunked Russia collusion story in 2016.

The New Hampshire Secretary of State’s office opposes the efforts to change an electoral process that has performed well, even during the COVID-19-plagued primary earlier this month.

“New Hampshire doesn’t have two Election Days, we have one,” Secretary of State Bill Gardner told NHJournal. “You can’t show up at the polls on the next day and vote. We have deadlines. They’re in our state’s constitution.”

Gardner also points out that New Hampshire’s constitution requires each precinct moderator to publicly announce and post the state’s general election results before departing polling locations. This creates a conflict with any mandate to count ballots received a week late.

“What the plaintiffs want in this case is a judicial rewriting of most or a substantial portion of our absentee ballot laws,” Assistant Attorney General Anthony Galdieri said earlier this month. “And the state has exceptional concerns that that’s going to create voter confusion, it’s going to create election official confusion and it has the potential to result in the disenfranchisement of voters.”