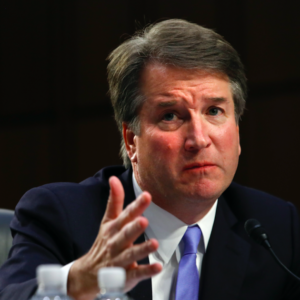 The sudden release of a “mysterious letter” allegedly accusing Judge Brett Kavanagh of sexual misconduct as a teenager appears to be a last-ditch effort by Democrats to derail his confirmation to the Supreme Court. And the behavior of anti-Kavanaugh senators during his confirmation only adds to the view that this latest charge is more about theater than substance.

On Thursday, nearly a week after the Senate Judiciary Committee’s televised hearings on Kavanaugh’s confirmation—and two months after she received it—ranking Democrat Dianne Feinstein (D-CA) announced that she had turned over a letter to the FBI for investigation.

“I have received information from an individual concerning the nomination of Brett Kavanaugh to the Supreme Court,” Feinstein said in a statement. “That individual strongly requested confidentiality, declined to come forward or press the matter further, and I have honored that decision. I have, however, referred the matter to federal investigative authorities.”

For its part, the FBI has declined to open any investigation into the allegations and is merely placing it in Kavanaugh’s background file “per the standard process” an FBI spokesperson said. They may not have had any choice. According to CNN, sources who’ve seen the letter say all the names in it were redacted by Sen. Feinstein.

Few people have actually seen the letter and reporting on the details is sketchy at best. Even Sen. Chuck Schumer has not seen the contents of the letter, according to his staff.  The Guardian claims to have a source who was “briefed on the contents of the letter” who says it describes an incident that occurred when Kavanaugh and the accuser were 17 years old and at a party. “Kavanaugh and a male friend had locked her in her room against her will, making her feel threatened, but she was able to get them out of the room,” the Guardian reports.

Sources close to Kavanaugh tell Inside Sources the judge was “completely blindsided” by the allegations. A spokesman for Georgetown Preparatory School in Maryland, the private school Kavanaugh attended, said the school has “no knowledge regarding any accusation.”

Kavanaugh supporters note that Feinstein, who has had the letter since July, could have asked the judge about the allegations during private meetings or discussed it with fellow members of her committee behind closed doors. She declined to do either one.  This is sparked speculation that she didn’t find the allegations in the letter serious enough to pursue.

It also appears that Feinstein only released it under pressure from fellow Democrats desperate to block a nomination that appears to be on track for confirmation before the Supreme Court reconvenes in October. Senate Republicans have announced that the Judiciary Committee will vote on Kavanaugh’s confirmation– almost certain to be a party-line 11-10 vote for confirmation– September 20th.

“Let me get this straight: this is statement about secret letter regarding a secret matter and an unidentified person.  Right.,” the Senator tweeted. “I will add: the FBI already performed and has reported on a background investigation on the nominee and this has been made available to all Senators on the Judiciary Committee.”

In fact, Judge Kavanaugh has gone through multiple background checks for various government jobs—including working in the White House—since 1993. Due to the contentious politics of his appointment to the DC Court of Appeals by President George W. Bush, he went through the committee hearing process twice.  These allegations, or anything similar, never surfaced.

If the goal of committee Democrats pressuring Feinstein to reveal the existence of this letter was, as White House spokesperson Kerri Kupec says, an “11th hour attempt to delay his confirmation,” the behavior of their own members may have undermined the effort.  High-profile theatrics by Senators (and likely 2020 POTUS candidates) Cory Booker (D-NJ) and Kamala Harris (D-CA) who suggested scandals that failed to appear have been criticized by court-watchers, including some of their fellow Democrats.

Sen. Schumer, on the other hand, was pleased with the Judiciary Committee’s performance, saying afterwards “It was a good week.”

American moderates may not agree. In the wake of Sen. Booker’s widely-mocked “I Am Spartacus” moment, Republican Sen. Susan Collins became the target of what her office describes as an “extortion” campaign— a crowd-funding effort raising more than $1 million Democrats are threatening to spend against her in 2020 if she votes for Kavanaugh’s confirmation. And on Thursday, the same day the “mysterious letter” story was being revealed, Sen. Collins’ office received “a three-foot-long cardboard cutout of male genitalia, accompanied by a profanity,” according to the Washington Post.

Unless the allegations in the letter are both explosive and corroborated, it’s unlikely that, in the environment of partisan chaos Kavanaugh’s opponents have created, this story will stop his eventual confirmation.