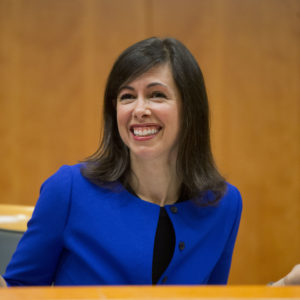 Conservative groups are warning the U.S. Senate against taking up a stalled vote to renominate a Democratic Federal Communications Commissioner, a move they say would give Democrats equal or majority control of the agency into the start of the Trump administration.

“‘Elections have consequences’, as [FCC] Chairman Wheeler himself crowed last summer,” TechFreedom President Berin Szoka said. “The American people ‘have chosen their path,’ and Republicans have every right to take control of the FCC on Inauguration Day.”

Szoka said Wheeler, who has yet to announce when he will depart the agency, “should, like nearly all FCC chairmen before him in this situation, resign on or before Inauguration Day.” His noncommittal responses to Republicans in Congress on whether he will leave at the start of the new administration have prompted the majority to put a hold on the full chamber vote to renominate Ronsenworcel, who will have to step down at the end of the year otherwise.

Wheeler will have to step down as chairman regardless once Trump takes over, but could technically stay on until his term ends in November 2018.

Reconfirming Rosenworcel in the lame duck would mean deadlocking the agency into 2017. Worse, they warn, is if Wheeler declines to step down, leaving Democrats in control until June 2017 when Democratic Commissioner Mignon Clyburn’s term expires, giving Trump the chance to appoint a Republican to replace her alongside Commissioners Ajit Pai and Michael O’Rielly to claim the majority.

“Any deadlock could significantly delay the lengthy and complex process of FCC reform,” the letter reads. “The window for legislative action before the midterm elections will be far shorter than most realize. Congress will not really be able to take up the issue in earnest until the FCC’s new Republican chairman has had an opportunity to begin voting out his agenda. Having waited two decades to pick up where the 1996 Telecom Act left off, we simply cannot afford to miss this narrow window for reform.”

The groups aren’t opposed to Rosenworcel keeping a seat at the agency, but “absolutely not before Wheeler has actually left the Commission.”

“Commissioner Rosenworcel should absolutely be returned to the commission, but not until a third Republican can be added,” Szoka added. “This is not to slight Rosenworcel at all. Despite our vast differences on policy matters, we have respected her integrity and independence. But there is simply no way to reconfirm her now without creating an imbalanced or deadlocked commission.”

The groups say Rosenworcel should take a short hiatus from the FCC with Wheeler moving her staff into other positions temporarily.

Rosenworcel helped Wheeler approve rules vehemently opposed by Republicans, including net neutrality and strict privacy rules for internet providers. She’s been reconfirmed by the Senate Commerce, Science and Transportation committee charged with overseeing the FCC but is still awaiting a shrinking and increasingly unlikely window to receive a vote by the full chamber.

Her renomiantion was futher complicated last month when Democratic Sens. Ed Markey of Massachusetts and Ron Wyden of Oregon placed their own holds on Rosenworcel, who they blamed for stalling the set-top box vote and dissenting on a proposal to use more Universal Service dollars to expand rural mobile broadband networks as part of the FCC’s Mobility Fund. Those holds have since been removed.

Wheeler has repeatedly advocated to Senate Republicans for Rosenworcel’s renomination, but he blasted those same lawmakers last month after they warned the chairman against passing more major rules along partisan lines ahead of the new administration. The warning forced Wheeler to back down from new price caps for the business broadband market and make it all but certain his plan to unlock the set-top box market will be dead on arrival at the next FCC.

Letter writers similarly urged the new Congress to move quickly on confirming a Republican for the Federal Trade Commission after Democratic Chairwoman Edith Ramirez steps down. The FTC, already short two commissioners, will also be deadlocked 1-1 come January until Trump appoints a Republican.