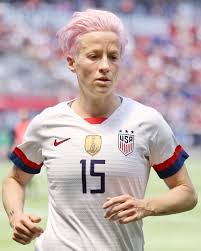 The same day the U.S. Women’s National Soccer Team was rolling through the ticker tape in New York City’s “Canyon of Heroes,” Democrats in Washington, D.C. were filing legislation to give them something perhaps even more rewarding: A mandate for equal pay.

“This would include any and all funds provided to host cities; participating local and state organizations; and Fédération Internationale de Football Association (FIFA).”

Manchin is an unlikely choice for the role of social justice warrior on the issue of gender pay equity, but he says he filed the bill after hearing from West Virginia University (WVU) Women’s Soccer Head Coach, Nikki Izzo-Brown. Manchin is a legendary college sports fan was recruited by WVU football to play quarterback. (His career was short-lived due to injury.)

“I received a letter from Coach Izzo-Brown highlighting her worries that women on the WVU Women’s Soccer Team could one day make the U.S. women’s team and not get paid the same as the men’s team. That’s just plain wrong,” Manchin said in a statement.

His bill currently has six co-sponsors, three of whom are running for president in 2020: Sens. Kirsten Gillibrand, Amy Klobuchar and Bernie Sanders.

Also on Thursday, Sen. Jeanne Shaheen (D-N.H.) extended an invitation to the USWNT  “on behalf of all the women Senators to discuss the challenges women face on and off the pitch.” Unfortunately for those lobbying for equal pay, the biggest challenge may be this:

Yes, the USWNT is riding higher than the men’s team at the moment — though their roles were reversed in 2014 when the men last qualified for the World Cup. (The USMNT’s best-ever performance was their third-place finish in 1930.) But the keyword in the phrase World Cup is “world.” Soccer is a global sport, which is good news given how relatively unpopular it is in the states.

In 2017, Major League Baseball reported more than $10 billion in revenue. The NFL, $12.5 billion. That same year, Major League Soccer (MLS), the biggest pro soccer league in the U.S., generated less than $1 billion.  And that’s the men’s league. The National Women’s Soccer League averaged about a third the level of support as their male counterparts.

But all these numbers are small potatoes. The real money in soccer is in the international arena.  (According to Gallup, just seven percent of Americans say soccer is their favorite sport to watch.) That’s where the U.S. women have had the most success, but also make the least money.

In America, the women’s World Cup may have felt like an event on par with the Super Bowl, but the entire tournament only generated about $130 million in revenues.  By comparison, last year’s men’s World Cup last year generated $6 billion — 43 times more money.

The revenue gap is so large, in fact, that the player’s 7 percent cut of the gross ($400 million) is more than twice as large as the entire women’s World Cup revenue.  In other words, if Senate Democrats want to achieve their goal of “equal pay,” the women players would have to get all of the revenue, have someone else cover all the tournament’s expenses, and they’d still be more than $200 million short.

Women’s soccer just isn’t that popular, either in America or around the globe. Men’s soccer has such a strong fan base that it can support both massive, multi-billion-dollar World Cup events every four years and sustain a series of professional leagues across Europe. Five of the top 10 revenue-generating sports leagues in the world are men’s soccer.

None of the top 25 revenue-generating leagues feature women athletes.

Some feminists argue that this fact is, in itself, a form of sexism. Even if it’s true that women sports fans also prefer to watch men’s professional sports, they say, women should still be paid the same.

Sen. Gillibrand, for example, rejects the premise that there should be a connection between the revenues generated and the incomes earned. When asked about the revenue gap, she told InsideSources “The women have more fans, the women win more, they just won the World Cup — it’s really significant.”

Writing for Forbes, marketing expert Blake Morgan acknowledges the fact that “the U.S. team does not bring in as much revenue as the men’s.

“However, it’s not just about facts today,” she writes, “Optics are just as important.” Morgan contends that FIFA should make a marketing decision to pay women at the same level as men — or else.

“For FIFA a few hundred million dollars is not a lot of money,” she wrote. “These optics can crush them in a quarter or make them more money in a quarter. If they care about money they will pay up.”

But as Megan McArdle at the Washington Post asks: “Even if we could stop people from watching the men more than the women, should we? And if not, should we expect FIFA to pay the women’s soccer players three times the total revenue of their tournament to produce an income distribution we like better?” [emphasis in original].

And then there’s the more practical question: Where will the money come from?  Sen. Manchin’s bill is an attempt to coerce FIFA into a politically correct pay scale, but nations all over the globe aggressively compete for FIFA events. If the Democrats push too hard, FIFA could take its soccer ball and go home. Or, more accurately, to Mexico or Canada, who are already hosting 2026 World Cup events.

Senators Shaheen and Warren declined repeated requests for comment regarding who should pay for the “equal pay” they are demanding.  They’ve also declined to comment on the math that many sports journalists have begun reporting regarding the World Cup and women’s pay: the players in the men’s World Cup only get 7 percent of the revenues collected, while the women get about 23 percent of overall revenue.

For Democrats, this issue is quickly turning into what soccer fans call an “own goal.”