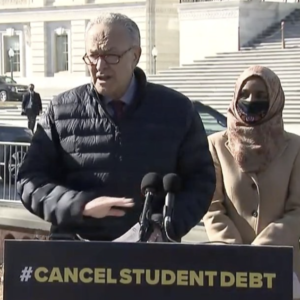 On Thursday, a group of Democrats from the U.S. House and Senate held a presser touting their proposal to have taxpayers pick up the tab for up to $50,000 in college debt per student.

Senate Majority Leader Chuck Schumer, D-N.Y., was there, along with Sen. Elizabeth Warren, D-Mass., and Reps. Ayanna Pressley, D-Mass., and Ilhan Omar, D-Minn. According to Pressley, more than 50 members have signed off on their nonbinding resolution to let borrowers off the hook.

Perhaps more interesting is who wasn’t there: Swing-district Democrats.

Instead, progressives are pushing for taxpayers to cover $1 trillion in college debt, arguing that it’s a matter of social justice.

“The student debt crisis is a racial and economic justice issue,” Pressley said. “With this pandemic worsening daily, we need bold and high impact policies that will match the scale and scope of the crisis and truly offer immediate relief for people—this must include across the board student debt cancellation.” She argues Biden can take this action via executive fiat.

The numbers are pretty basic: More affluent people tend to go to college, and they are also more likely to attend the kind of expensive, private schools where grads can rack up tens of thousands of dollars in debt.

“Student debt is concentrated among high-income households because people with expensive degrees tend to be richer,” Preston Cooper of the Foundation for Research on Equal Opportunity told InsideSources. “Meanwhile, people with only a high school degree – who have been hit hardest by the COVID-19 recession – will hardly get anything out of the plan.”

A working paper from the National Bureau of Economic Research by economists Sylvain Catherine and Constantine Yannelis concluded that universal student loan forgiveness would benefit the top ten percent of income earners as much as the bottom third. “Most of the benefits of the policy would accrue to upper-income individuals, which is similar to other regressive policies such as the mortgage interest tax deduction and SALT [state and local tax deductions],” Yannelis told InsideSources.

Even a report from the liberal Brookings Institute found the Schumer/Pressley approach would help the rich and skip the poor. “More than 90 percent of children from the highest-income families have attended college by age 22 versus 35 percent from the lowest-income families,” they report.

And while a higher percentage of Americans have four-year degrees than ever before, it’s still just a third of the population. Not to mention the many families who saved for college, made tough economic decisions to avoid debt, or who have paid off their loans as promised when they took the money.

As a result, across-the-board student debt forgiveness as proposed by these Democrats benefits affluent, disproportionately white families, paid for by their non-college-educated neighbors. So why do it?

Perhaps because these white, suburban progressives are a key part of the Democratic coalition. According to one analysis, Biden won 45 of the nation’s 50 counties with the most college graduates. In Falls Church City, Va., where 43 percent of adults have a college degree — the nation’s most-educated county — Biden got 83 percent of the vote.

For his part, Biden has long supported a more modest approach. “The president has and continues to support canceling $10,000 of federal student loan debt per person as a response to the COVID crisis,” White House spokesperson Jen Psaki said Thursday. The Biden plan would cost taxpayers an estimated $370 billion. Psaki also said Biden rejects the executive action argument.

“He’s calling on Congress to draft the proposal. And if it is passed and sent to his desk, he will look forward to signing it,” Psaki said.