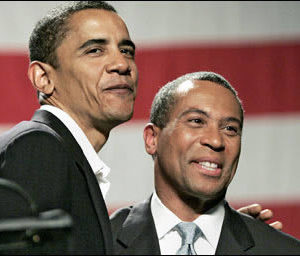 Despite Backing from ObamaWorld, Deval Patrick Drops Out of 2020 Race

Multiple media reports confirm that former Massachusetts governor Deval Patrick will not be running for president in 2020, despite having started a successful political PAC and Patrick’s standing as the top pick inside ObamaWorld.

“If true, this news takes off the board one of ten strong Democrats who had a path to score Democratic primary victories in the three early states and to ultimately take on President Trump,” David Paleologos, Director
of the Suffolk University Political Research Center, told InsideSources.  “The windfall beneficiaries regionally are Senators Elizabeth Warren and Bernie Sanders.  Among African-American voters, especially men, Corey Booker benefits.”

Patrick, a two-term Democrat who made the counter-intuitive move to Bain Capital—the same company Democrats vilified due to its connection to another former Massachusetts governor, Mitt Romney—has spoken openly about considering a 2020 POTUS bid and the “encouragement I’ve been getting from a number of places and source,” including from high-dollar Democratic donors.

In addition, Patrick’s political action committee, the Reason To Believe PAC, was a success. According to data at OpenSecrets.org, the PAC raised more than $500,000 in 2018 (NY Gov. Andrew Cuomo’s raised less than one-tenth that amount.) And according to the PAC’s website, “Reason To Believe endorsed 27 progressive candidates and 3 ballot initiatives. 17 won their races.”

But the most significant encouragement came from people close to former President Barack Obama. According to reporting by Politico, Obama was “nudging him to run…Patrick is ObamaWorld’s clear and away 2020 favorite.”   Close Obama advisor Valerie Jarrett in particular has been pushing a Patrick bid, calling a Deval Patrick presidency “what my heart desires.”

And just weeks ago, the New Yorker ran a profile of Patrick that included the intriguing news that Michelle Obama had met with Deval’s wife Diane to encourage her to support a presidential bid.  According to their reporting, Diane did just that.

There are many reasons for people not to run for office. Michael Avenatti used concerns from his family–the classic (and frequently insincere) reason for bowing out. That does not appear to be the case for Deval Patrick.

One reason, however, may have been his weakness among Democrats in his home state of Massachusetts. Patrick has never been in the top tier in national polls of potential 2020 candidates, but that’s to be expected in a field of more than 30 candidates. But a September poll of Massachusetts Democrats showing just 38 percent thought he should even run, while about 48 percent  were opposed–is hardly a ringing endorsement. And a more recent UMass poll of Bay State Democrats put the former governor in single digits.

He is expected to make a formal announcement of his decision not to run, perhaps later this week.