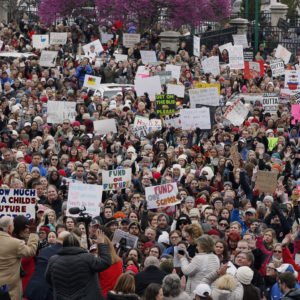 The crowd cheers during a teacher rally at the state Capitol in Oklahoma City, Monday, April 2, 2018. Teachers were holding separate protests in Oklahoma and Kentucky on Monday to voice dissatisfaction with issues like pay and pensions. (AP Photo/Sue Ogrocki)
News

The state legislature passed a measure last week giving teachers a $6,100 pay hike plus a $1,250 raise for support staff and an additional $50 million in education funding. It’s the first increase for teachers in a decade, who are among the lowest-paid educators in the country. Still, teachers had called for a three-year package with a $10,000 raise and $200 million in education funding.

“Just like Oklahoma families, we are only able to do what our budget allows,” Gov. Mary Fallin, a Republican, said in a statement Monday, adding that she’s been trying to raise teacher pay for three years. “Significant revenue-raising measures were approved to make this pay raise and additional school funding possible. We must be responsible not to neglect other areas of need in the state such as corrections and health and human services as we continue to consider additional education funding measures.”

Fallin has been trying to institute criminal justice reforms that include addiction treatment centers for nonviolent offenders and for improving mental health services.

The Oklahoma Education Association has called the pay increase a “good down-payment” but remains concerned that low salaries and a smaller-than-hoped-for investment in public education will continue to be harmful.

“We’ve got textbooks that are put together with duct tape and prayers,” said Bill Guy, an association spokesman. “We know they can’t fix [the problem] overnight but they’ve got to fix it.”

More than 25,000 educators protested at the state Capitol Monday; officials estimated that 20,000 could be on site Tuesday. The state’s three largest school districts– Edmond, Oklahoma City and Tulsa – were closed due to the walkout, but some schools are providing free meals to students 18 and younger. Faith organizations and other groups are trying to help meet child-care needs for parents.

The average teacher salary in Oklahoma is less than $42,000, according to data from the Bureau of Labor Statistics, and education spending in the state is $2.4 billion. The state’s general revenue fund has about $7 billion, and lawmakers have been seeking ways to raise more money. Although the state’s economy has improved recently, it’s still tight.

The Oklahoma State Board of Equalization sets a budget estimate in February based on revenue expectations. Lawmakers cannot spend more money than the Board authorizes, and any tax hikes must hit a vote threshold of 75 percent of the lawmakers who are present. Last week, the legislature voted to increase taxes on oil and gas production, gasoline and diesel. A measure to increase hotel and motel taxes by $5 per night was initially successful but was ultimately repealed after a lobbying push from the hospitality industry.

A fact sheet from the American Hotels and Lodging Association notes that there are more than 53,000 hotel jobs in the state, more than 91,000 hospitality employees, and guest spending totals $5.5 billion. Tacking another $5 per night onto already existing taxes could price Oklahoma out of the convention business, said an industry spokesman.

Oklahoma’s teachers aren’t the only ones agitating for more funding. West Virginia’s teachers went on strike for nine days and secured a 5 percent pay raise not just for themselves but for all state employees. Teachers in Kentucky are rallying against a controversial bill that cuts pensions. The Kentucky Education Association said that new teachers will use a “hybrid cash plan” that could make jobs in other states more attractive.

Teachers in Arizona want a 20 percent pay raise and the restoration of education funding to pre-2008 levels. They have not yet walked off the job but are keenly watching their colleagues in other states.

“We have 50,000 educators who have survived the recession and the salary freeze,” said Joe Thomas, president of the Arizona Education Association, who added that even a 20 percent raise would still put teachers beneath the national average. “They’ve called, emailed and met with politicians but nothing has been done. They’re at the end of their rope, but then West Virginia happened. If that’s the only language politicians speak, we’ll speak that language.”