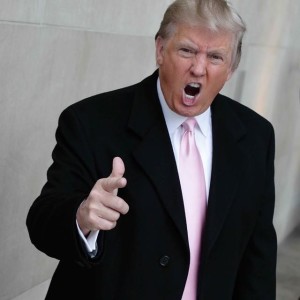 Well, that was anti-climactic.

After weeks of teasing a tax plan that would buck Republican orthodoxy, GOP presidential frontrunner Donald Trump unveiled proposals Monday that were dubbed “amazingly conventional,” “utterly plain-vanilla,” and “not so populist” after all.

Throughout this month, Trump has raised eyebrows by saying “hedge fund guys” were going to hate his plan, that they’d have to pay more under his proposals, and that “it’s unfair” for people making a tremendous amount of money to pay virtually no taxes.

In the end, though, Trump announced tax policies that resemble previous Republican offerings, including the plans of one of his competitors in the White House race: former Florida Gov. Jeb Bush. As the Atlantic reported, Trump’s plan “would dramatically reshape the tax code by cutting the current seven income brackets to four, slashing rates for the rich, poor, and businesses, and eliminating a host of loopholes and deductions.”

Since Trump opted not to challenge convention, his proposals drew predictable partisan reactions.

Conservative kingmaker Grover Norquist, president of Americans for Tax Reform, said the plan “is certainly consistent with the Taxpayer Protection Pledge,” in which political candidates promise not to support raising taxes.

“Trump has said he opposes net tax hikes and has made clear that the real problem is spending,” Norquist said in a statement. “This plan is a reform, not a tax hike.”

But liberals like Harry Stein, who directs fiscal policy at the Center for American Progress Action Fund, weren’t impressed. Stein told InsideSources that Trump’s proposals primarily benefit the rich, much like other Republican plans.

Stein also said Trump stands to benefit personally from the tax system he envisions, particularly with the abolishing of the estate take: “If we take Trump at his word that he’s worth $9 billion, $10 billion, that’s billions of dollars in tax savings for his heirs.”

Like Kyle Pomerleau of the conservative Tax Foundation, Stein rejects Trump’s claim that his plan will be revenue neutral, saying “it looks very similar to Bush’s plan in terms of the big parameters, and Bush’s plan costs over $3 trillion in the first 10 years. A tax cut on that scale just can’t exist in the same world over the long term as things like Medicare and Medicaid and investments in education and infrastructure.”

“Hedge fund managers are going to come out way ahead,” he said. “They’ll get a huge tax cut from Donald Trump, even though he says they’re getting away with murder.”