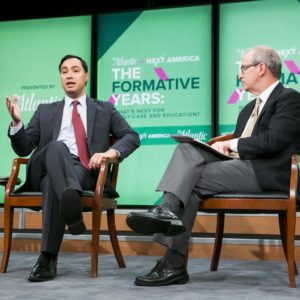 Proposals to expand access, improve quality, and lower costs of early child care were discussed at a Washington, D.C. event on Wednesday at the Newseum, blocks away from the U.S. Capitol building.

The event, hosted by Atlantic Media, began with a discussion between Rep. Joaquin Castro, D-Texas, and Ronald Brownstein, Atlantic Media’s director for strategic partnerships. Following their dialogue, a panel of child-care experts from think tanks across the political spectrum debated federal child-care proposals before state child-care efforts in Alabama and Massachusetts were highlighted.

Child care is “not a conservative or a liberal issue” said Castro, who spent time underscoring child-care and Pre-K efforts in his native San Antonio. Castro’s twin brother Julián Castro was mayor of San Antonio where he pushed to expand the city’s Pre-K programs before he was tapped to become Secretary of Housing and Urban Development during President Obama’s second term.

One of Rep. Castro’s main talking points was that the quality of Pre-K programs matter. Incidentally, Texas is currently undergoing a major budget fight in which the Republican Gov. Gregg Abbott is facing down legislators in his own party over funding for quality Pre-K.

When the discussion turned to federal child-care policy, Rep. Castro signaled that he might be willing to work with the new administration. During the presidential campaign, then-candidate Trump proposed child-care reforms that would be funded through tax incentives. Ivanka Trump, the president’s daughter and a leading surrogate in the campaign’s outreach to women, is a key advocate for the plan.

While Republican leaders have yet to introduce specific child-care legislation, a question among policy wonks is whether the plan will be implemented primarily through tax credits or through tax deductions and savings accounts. Many at the event argued that a program built on tax credits would have more reach, while the latter options would appear to primarily benefit the higher-income families that pay more in federal taxes and have money to invest in educational savings accounts.

“If you offer a [tax] credit, I do believe it would cover many more Americans, if it’s just a tax deduction, that’s more problematic because it would leave out probably 40 percent of people,” said Castro.

Castro added the caveat that when taken with the new administration’s budget proposal—which includes deep cuts to discretionary spending that could affect Pre-K programs like Head Start—the end result could be “one step forward, one step back.” The San Antonio congressman also suggested that he would be willing to review the efficacy of existing federal Pre-K and child-care programs, which Brownstein said Republicans have proposed to streamline into one block grant.

The panel of think tank experts that followed were less forgiving of President Trump’s proposal. One of the panelists, Elaine Maag, a senior researcher at the Brookings Institution’s Tax Policy Center, recently co-authored a study that found the president’s proposal would cost $115 billion over ten years. Furthermore, Maag argued that the broad strokes of the proposal suggest a plan that would be regressive, meaning it would disproportionately benefit wealthier families.

Katharine Stevens, another panelist and a resident scholar at the conservative American Enterprise Institute, appeared to agree that President Trump’s proposal could do more to address low and middle-income families. During the discussion, Stevens emphasized that the primary need for child-care aid exists in the same 40 percent of American families with young children who earn less than $50,000 per year that Castro had cited.

In Congress, Rep. Katherine Clark, D-Mass., circulated a “Dear Colleague” letter on Tuesday seeking co-sponsors to back her re-introduction of the “21st Century Child Care Investment Act.” Left-leaning groups like the Center for American progress backed that proposal last year. Notably, the Democrats’ proposal also relies on tax-credits to expand access and affordability for child care—though in their legislation the tax-credits would go directly to child-care providers rather than through parents. Rep. Clark is expected to introduce her legislation to the new Congress on Wednesday or Thursday.

There is no clear timetable for when Republicans plan to unveil their child care tax incentive program. Some have suggested that like their school choice proposal and elements of their healthcare proposal, child-care tax incentives could be part of a larger budget reconciliation process that would require the support of a simple majority of Senators.

While accomplishing these reforms would be easier without having to overcome a Democratic filibuster, it remains to be seen if GOP leaders who have advocated for a simpler tax code will take issue with adding complexity to the tax system.