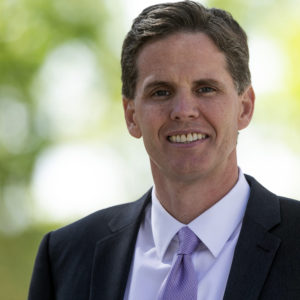 As the political world remained focused on what the outcome of U.S. House primaries in California could portend about a blue wave, another contest could have far-reaching implications for the future of public schools.

The race for Superintendent of Public Instruction features a classic battle between a school reformer and a candidate backed by the powerful teachers’ union. In a normal election cycle, the union candidate would have a clear edge. This year, reformers are rolling the dice.

“Political perception is the issue,” said David Plank, a professor at the Stanford University Graduate School of Education. “The [California Teachers’ Union] sees this as their sphere of influence. They will reaffirm their dominance of this sector. Any successful challenge will undermine the view that they are in charge.”

Marshall Tuck led the turnaround of the Los Angeles Unified School District that saw four-year graduation rates increase by more than 60 percent and improved the academic performance of students. State Assemblyman Tony Thurmond sat on the board for the West Contra County Unified School District where he launched a program to teach entrepreneurship skills to young people and also oversaw truancy prevention programs.

The California Teachers’ Union backs Thurmond. With more than 300,000 public school teachers in the state, the union is incredibly powerful and has invested a significant amount of money in the race. Spending by outside groups totaled more than $10 million for this race. That includes heavy spending by the teachers’ union, forcing them to dig deep to bolster Thurmond while they also joined the battle in the costly gubernatorial contest.

Under California’s primary system, in nonpartisan races, if a candidate garners more than 50 percent of the ballots cast, that person automatically wins the job and campaigning ends. With about 92 percent of the votes counted, Marshall was holding a small lead of 37 percent to 34 percent over Thurmond. The two of them will advance to the general election in November.

Although Tuck and Thurmond, both Democrats, hold similar views on most issues, one area is producing a stark difference: the Local Control Funding Formula, which is supposed to give spending flexibility to districts with high numbers of disadvantaged students, such as English Language Learners or those coming from low-income households. Current Superintendent of Public Instruction Tom Torlakson, who is termed out, allowed the money to be used for teacher raises. Tuck has said he will put a halt to that while Thurmond has opposed efforts to more closely monitor those dollars.

The teachers’ union has long been criticized for the stranglehold it has over education.

In endorsing Tuck, the San Diego Union-Tribune wrote, “Instead of focusing on teacher quality, the Golden State has teacher protections so extreme — and so likely to funnel poor performing teachers to struggling schools with greater numbers of poor and minority students — that The New York Times Editorial Board in 2014 called the protections a ‘shameful’ abuse of the civil rights of those students.”

While the state’s teachers’ union remains a significant force, the success of non-affiliated charter schools has started to change the educational landscape. As the saying holds, “As goes California, so goes the nation.”

Tuck headed the nonprofit Green Dot Public Schools during which he helped establish 10 public charter high schools in some of the poorest neighborhoods in Los Angeles. A direct mail piece from the outside group EdVoice called him “The man California’s bureaucracies fear most” and noted he has a “track record of fixing broken schools.” Tuck was endorsed by former U.S. Secretary of Education Arne Duncan.

Thurmond, meanwhile, tells voters a compelling story of how he and a brother were sent to live with a relative in Philadelphia, PA. He credits that relative for keeping him focused on his studies and says the foundation of his public school education has made him successful today. He is a State Assemblyman, representing a stretch of communities around Oakland.

The Superintendent of Public Instruction does not hold a lot of influence over public policy. The office holder runs the Department of Education, but the state also has a Secretary of Education, a State Board of Education and more than 800 elementary, middle and high school districts overseeing 6.2 million students.

The Superintendent is a pulpit,” Plank said. “It’s just not that bully. Still, having your person in the pulpit is a good thing.”

But if Tuck wins in November, charter school advocates and education reformers will have a major supporter in a significant statewide role in the most populous state in the nation.