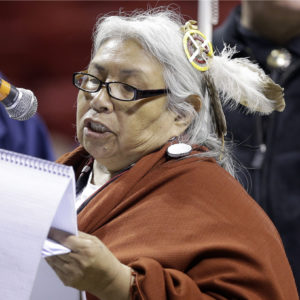 Faith Spotted Eagle Just Received a Vote in the Electoral College. Who Is She?

To the chagrin of some Democrats, the Electoral College kept the faith and voted to make Donald Trump the forty-fifth president of the United States. Despite last minute pleas from celebrities and citizens, all but two of Trump’s electors were unswayed. Instead, the surprising loser was Hillary Clinton, who lost five votes to Colin Powell, Bernie Sanders, and Faith Spotted Eagle.

Who is Spotted Eagle?

In the words of Robert Satiacum, Jr., the Washington elector who cast that vote, she is “a real leader” who has stood up for environmental causes. The 68 year-old is a member of South Dakota’s Yankton Sioux tribe. A licensed counselor, she began a group known as the Brave Heart Society to help bring back traditional knowledge and culture by working with youth, particularly young women.

On a national level, she is more well known for her environmental activism. In 2013, she led protests against the Keystone pipeline, which would have crossed South Dakota. During the protests, she feared not only environmental contamination but that the “man camps” that the company planned to build to house its primarily-male workforce would lead to violence against women. At the time, she likened the idea to U.S. Army forts in the plains in the 1800s.

Now, she is an ally of the protesters trying to stop the construction of the Dakota Access Pipeline. In September, she and other tribal leaders in Yankton sued the U.S. Army Corps of Engineers and the U.S. Fish and Wildlife Service, arguing that the project had failed to receive a proper environmental study.

She now tells one native news network that she feels she was born fighting for the river and will work to stop the DAPL pipeline as well.

“I’m not a candidate [for president], but I stand for something,” Spotted Eagle said when she heard of the vote.

Satiacum and Spotted Eagle met during the DAPL protests. Despite being from very different regions of the country, they are united by shared interests. Satiacum, a member of the Puyallup tribe, has strong ties to environmental and native rights causes. Although Satiacum did not publicly announce his intention to support the native activist, he had suggested that he might not be a loyal elector.

Even before the election, Satiacum had hinted that, regardless of the poll results, he might vote for an alternate candidate, perhaps even someone who was not officially on the ballot. In October, after being selected as a Washington elector, Satiacum told reporters he was uncertain if he could support either Clinton or Trump with his vote in the college.

“How can I say and do and be who I am and then cast a vote for somebody that’s the same as Trump?” Satiacum said. “They may be male, female, but they’re in the same canoe.”

Satiacum comes from a family long involved in protests for native rights. His father, Robert Satiacum Sr., led a campaign for native fishing rights in the Pacific Northwest in the 1960’s and 70’s.  Although a leader of the Puyallup tribe, he later fled criminal charges, including racketeering, the sale of counterfeit cigarettes, and attempted murder, and applied for political refugee status in Canada.

After the story hinting at Satiacum’s potential infidelity was released, officials from the Democratic Party in Washington reached out to him for assurance that he would indeed cast his ballot for Clinton. At the time, he reassured the party that he would support Clinton, despite having been a strong supporter of Bernie Sanders during the primary.

Satiacum’s vote not only breaks his pledge to the Democratic Party, it also violates state law, which requires that each elector sign “a pledge that, as an elector, he or she will vote for the candidates nominated by that party.” Violation of the pledge carries a $1,000 fine. Washington Secretary of State Kim Wyman’s office confirmed that the office will enforce that penalty.