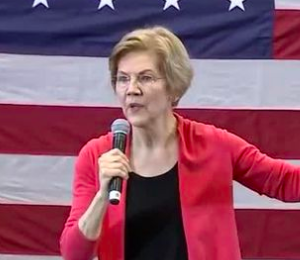 Massachusetts Sen. Elizabeth Warren got a warm welcome in neighboring New Hampshire at her first Granite State event of the 2020 campaign season, though the vision of America she offered the audience was far from bright. 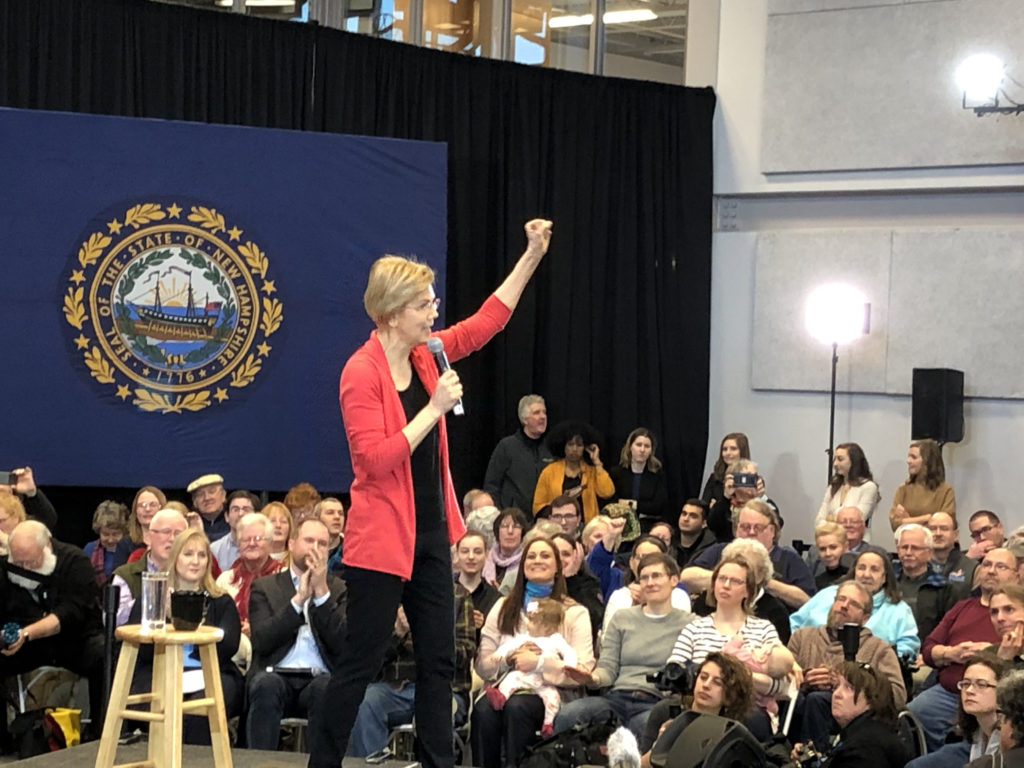 Again and again, the Massachusetts senator hit what appears to be an emerging theme of her 2020 campaign, arguing that corporations and the wealthy are benefitting from a form of “corruption.”

“An America that works only for the wealthy and the well-connected? That’s corruption, plain and simple, and we need to call it out,” Warren said. “And that’s the first we can make systemic change, change the rules in Washington.”

The corruption theme is also on the front page of Warren’s campaign website (“We will save our democracy. We will end Washington corruption. Will you join us?) and a Google search for her home page brings the headline “End Corruption in Washington. Join our grassroots movement.”

Warren’s speech echoed the dark view—some would say “Trumpian” view—of an America where an elite is riding roughshod over a victimized middle class that were featured in her campaign-launch video.  “10,000 rich families in America have more power than all the other millions and millions combined,” she told the New Hampshire crowd.

“Americans are really mad about the current system: the economic system, the political system, they ‘re both corrupt,” said Adam Green of the Progressive Change Campaign Committee, a group closely allied with Warren,  after the speech.  “Trump said it was corrupt, but he made it more corrupt. What Trump said in 2016 was that the system is not working for working people, it’s working for the big guys–then he went in there and helped the big guys. Sen. Warren’s the real deal.”

It’s a message that resonated with some in the audience.

Tom brought his mother, a recent transplant to New Hampshire from Florida, to the rally. “I’m happy to come, but I really like that [Julian] Castro from Texas. I want to find out more about him,” she said.

However, the issue that generated the most reaction from the audience was climate change and energy policy.

During the Q&A portion of the program, Warren was asked about the EPA and environmental protection. “I’m going to say something really shocking about all of our questions about clean water, clean air, the urgency of this moment, about the direction and survivability of this earth. I’m glad many of you are sitting down. Ready?

“I believe in science,” Warren said, to applause and laughter.

When asked about the EPA “dropping the ball” on enforcing clean water regulations, Warren made her only direct attack on the Trump administration: “This EPA hasn’t dropped the ball. They’ve thrown the ball on the ground,”

With the New Hampshire primary more than a year away, few voters are prepared to endorse any of the more than 30 potential Democratic candidates in the race. Several members of the audience said they saw this as part of the traditional process of Granite State voters seeing the candidates up close.

Leann from Bedford and her 16-year-old daughter Lily said they just happened to have the afternoon free and “just stopped by to listen.”

“That’s one of the nice things about living in New Hampshire is that you get to see a wide range of potential candidates,” Leann said.  However, they both acknowledged that the fact Sen. Warren is a woman is part of her appeal.

“I’m definitely an activist feminist and to see a woman stand up and run for president again is super-inspiring to me,” Lily said.

And what about the other women candidates, like California Sen. Kamala Harris and Hawaii’s Rep. Tulsi Gabbard?

“We’re interested in all of them,” Leann said. “We just have to have someone to beat Trump.”