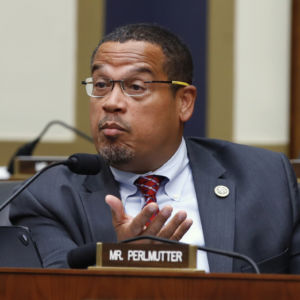 Minnesota is rarely on political radars. After all, the state has been solidly blue for decades (it was the only state Ronald Reagan didn’t carry in his 1984 reelection). This year looks like it may be different. In Minnesota, 2018 is shaping up to be an interesting election year, not only because of the races in play, but also because of who is on the ballot. At the primaries on Tuesday, Minnesota voters selected Rep. Keith Ellison as the Democratic nominee for state Attorney General and present state Rep. Ilhan Omar (D) to run for his seat in the House of Representatives, representing MN-05. Both candidates have narrowly dodged questions about skeletons in their pasts, after allegations of domestic abuse were made against Ellison just before the election and questions have been raised about Omar’s marriage status.

“Tonight we are celebrating because we engaged and empowered our community and we won!” said Omar in a statement after the results were announced. “Our campaign staff, our volunteers, and the people of the Fifth Congressional District are the inspiration we need to get up every day and fight for a democracy that guarantees a more just and equitable society.”

Omar won a six-way race to be the Democratic candidate, winning with 48.2 percent of the vote. Since MN-05 is strongly Democratic, she is all but assured a seat in the House next year.

Omar has centered much of her campaign around her identity as a Somali immigrant, who came to the U.S. as a child refugee. However, her immigration background has raised questions for years, since evidence seems to suggest that she committed some sort of immigration fraud.

Since Omar was running for a seat in the Minnesota state house, several local bloggers had been questioning details of her immigration story. Omar has three children with a man named Ahmed Aden (also referred to as Ahmed Hirsi), who she refers to as her husband. She says that she married Aden in 2002, but later divorced him in order to marry a man named Ahmed Nur Said Elmi. In the second marriage, Omar helped Elmi to receive immigration papers. She later ended her relationship with Elmi and reconnected with Aden.

The trouble is, the legal status of these marriages is in question. It is unclear if Omar ever legally divorced her first husband, and multiple online statements seem to suggest that the second man may be her brother.

“What I found online reflected that Omar had in fact applied for a license to marry Aden/Hirsi. (The entry on the Minnesota Official Marriage System has since been scrubbed.),” wrote Minnesota blogger Scott Johnson during Omar’s 2016 run for the state house. “The statement further explained that Omar had married her current legal husband—Ahmed Nur Said Elmi—in 2009. Though they split in 2011, with Elmi returning to the United Kingdom, Omar never got around to dissolving the marriage.”

Omar’s campaign has studiously avoided answering questions on the matter.

Meanwhile, Ellison, presently both the deputy chair of the Democratic National Committee and a sitting representative, was confronted with unexpected allegations of domestic abuse against Karen Monahan, a former girlfriend.

The story broke just two days before the election, when Monahan’s son, Austin Monahan, posted on Facebook, claiming that Ellison had put his mother through “pure hell” in the course of their relationship. Most shockingly, he claimed that he had seen video of Ellison physically and verbally assaulting his mother.

“In the middle of 2017, I was using my moms computer trying to download something and I clicked on a file, I found over 100 text and twitter messages and video almost 2 min long that showed Keith Ellison dragging my mama off the bed by her feet, screaming and calling her a ‘fucking bitch’ and telling her to get the fuck out of his house,” he wrote. “The messages I found, were mixed with him consistently telling my mom he wanted her back, he missed her, he knew he fucked up and we wished he could do things different, he would victim shaming, bully her, and threaten her if she went public.”

Ellison denied the allegations, saying in a statement that though the relationship had ended, he still cared for Monahan’s well-being.

“This video does not exist because I never behaved in this way, and any characterization otherwise is false,” Ellison’s statement read.

In tweets, Monahan stood behind her son’s account, saying that “every statement [Austin] made was true.” Some bloggers began to sift through her past Twitter use, pointing out a series of cryptic tweets implying relationship abuse by an unnamed person and suggesting that they may be about Ellison. So far, no one has seen the alleged video, nor can they verify that it even exists. Furthermore, the news broke very late, after thousands of ballots had already been cast.

Though perhaps weakened as a candidate, Ellison still is likely to win his race even in this #MeToo era. Minnesota has not elected a Republican attorney general since 1966.

The state’s political calendar was upended last year, when allegations of sexual harrasment were made against then-Senator Al Franken (D). After Franken’s resignation in late December, appointing an intermin replacement fell to Gov. Mark Dayton (D), who had relatively few options to choose from. Over the course of the last few years, the state’s Democratic bench has been decimated.