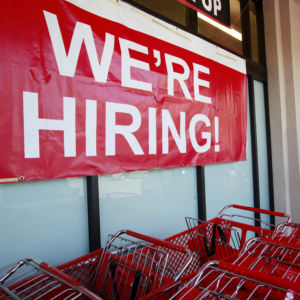 Employment growth bounced back after a particularly destructive hurricane season with the addition of 261,000 new jobs in the month of October, the federal government reported Friday.

But a deadly hurricane season pushed the growth rate into the red in the last monthly jobs report, the first negative report since 2010. The Bureau of Labor Statistics (BLS) found the labor market rebounded from the slump, with the addition of 261,000 new jobs.

“Total nonfarm payroll employment rose by 261,000 in October, and the unemployment rate edged down to 4.1 percent,” the BLS report stated. “Employment in food services and drinking places increased sharply, mostly offsetting a decline in September that largely reflected the impact of Hurricanes Irma and Harvey. In October, job gains also occurred in professional and business services, manufacturing, and health care.”

“The labor market has actually been doing pretty well,” Sophia Koropeckyj, managing director at Moody’s Analytics, told InsideSources. “We are now into our seventh year of steady expansion. That began in the beginning of 2010, and we have had virtually uninterrupted payroll gains every month. The only interruption was last month, and that was because of the impact of the hurricanes in the South.”

The labor market has shown significant improvements over the decade since the Great Recession first hit. Former President Barack Obama oversaw an unusually slow economic turnaround from the downturn that followed the subprime mortgage crisis and the financial collapse of 2007— his last couple of years in office, recovery began to pick up steam.

“This month we expect a pretty large number because a lot of the people who were unable work last month are going to be back working,” Koropeckyj said. “There’s plenty of evidence that the labor market expansion is healthy and will continue, and we can see evidence from improved construction, we can see evidence in manufacturing.”

The economy has even remained close to full employment over the last year. The unemployment rate is currently 4.1 percent percent. Job growth coupled with low unemployment has even helped pull some people into the labor market who were not considered unemployed because of long-term joblessness. But the lower rate also means fewer available workers for companies to recruit.

“There’s really nothing large that is preventing the employment situation from maintaining it’s steady expansion, except for the diminishing availability of workers,” Koropeckyj said. “We’ve been seeing 200,000 plus average growth for quite a while, but that’s going to be harder to sustain because of the tightening labor market.”

Unlike the employment rate, the labor force participation rate tracks both the employed and those actively seeking work as a percentage of the total population. It keeps track of people who have fallen out of the labor market due to long-term joblessness. The participation rate, the proportion of workers plus work-seekers, decreased by 0.4 percentage point to 62.7 percent.

“There is the possibility that the expansion will be sustained if more people who have been on the sidelines in the last few years make their way back into the labor market,” Koropeckyj said. “But it’s really hard to pinpoint what will bring those people back in, particularly when we’re talking about prime-age, that would be considered 25 to 54-year-old men.”

The bigger concern, Koropeckyj adds, is the growing number of prime-age adults facing joblessness. Because the labor force participation rate also accounts for people who have a good reason not to be in the labor market, like retirees and student adults—and those who, by the numbers, ought to be working or looking for work. The employment-to-population ratio for prime-age adults has improved but not fully recovered since the recession. Improvements have been particularly sluggish among prime-age men who fell out of the labor market in the late 2010s.

Worker compensation is another stubborn sticking point, despite overall positive trends. The BLS report found that average wages decreased by one cents and now sit at $26.53 for the month of October. Employees typically see their wages rise as the labor market improves because companies have a smaller pool of people to hire. Those improvements have been lackluster during this recovery.

The economy has still improved significantly despite those ongoing concerns: The Gross Domestic Product (GDP), a measure of national economic growth, has even maintained a three percent growth rate over the last two fiscal quarters—after struggling to surpass one percent in recent years, with the exception of some isolated jumps. The positive trends have even sparked increased confidence in the economy.

Food services and drinking saw the most significant influx of new jobs at 89,000. That was followed by professional and business services, manufacturing, and healthcare. The jobs report does not include farm workers, private household employees, or nonprofits.