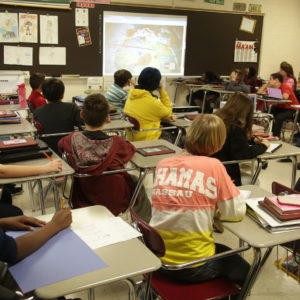 New Federal Law Puts States In Charge of Education. But How Exactly Will It Work?

This story was produced in partnership with The Times of Northwest Indiana. Part 2 of 2.

A new federal law designed to put states in charge of school accountability soon will be implemented fully throughout the country, but there still are questions as to whether — and how — it will work.

The Every Student Succeeds Act, called ESSA, is bipartisan legislation passed by a Republican U.S. Congress and signed into law by President Barack Obama in December 2015.

Under the law, states were required to submit plans detailing how they would implement the law, and to engage with a wide array of stakeholders instead of just a few traditional education officials such as superintendents and classroom teachers.

With two deadlines to choose from, Indiana chose to submit its plan to the U.S. Department of Education in September, while Illinois sent in its plan in April.

Since the law took effect in 2016, state education officials and lawmakers have been getting a handle on federal compliance and understanding their new responsibilities.

But how much of the law is new, and how much is a rehash of previous federal requirements?

“A lot of ESSA is still No Child Left Behind reworded,” said Sharon Johnson-Shirley, superintendent of Lake Ridge New Tech schools, during a recent roundtable discussion with other local superintendents held at The Times Oct. 23 in Munster.

Both ESSA and No Child Left Behind, which was passed in 2001 and signed into law by President George W. Bush, are the most recent reincarnations of a 1960s-era law that attempted to standardize education requirements, standards and academic benchmarks among all states, by having the federal government set them.

As with ESSA, No Child Left Behind focused on eliminating achievement gaps among student demographic groups and called for high academic standards and school accountability.

ESSA marks the first time since the 1980s, however, that federal law requires the U.S. Department of Education to pull back and hand over control to states.

“In the past, federal law was pretty prescriptive for states for how they should handle their statewide accountability systems,” said Chris Minnich, executive director of the Council of Chief State School Officers.

“But there was no clear data on how kids or groups of kids were doing. No Child Left Behind fixed that, but there was a single solution for states, with no choice” on how schools could measure student progress.

That single solution was test scores, which led to overwhelming criticism that No Child Left Behind was forcing teachers to “teach to the test.”

Classroom teachers found themselves focusing on teaching testing strategies to try to boost scores, which they feared were only teaching students how to excel at picking the right answer through a process of elimination, instead of their learning how to analyze and apply what they learned. Tying teacher evaluations to test scores also led to raucous opposition.

ESSA still requires students in grades three through eight to take annual assessments and high school students to be tested at least twice over four years. Now, however, states will determine for themselves how much weight scores will have on a school’s accountability rating.

In addition to test scores, schools must track graduation rates, English-language proficiency, and the academic progress of low-income and minority students. States also have to choose other indicators of student growth, but ESSA doesn’t define what else can be used. That’s part of the flexibility written into the law that gives states more control of local education.

States are looking at things such as chronic absenteeism or school climate surveys that will help parents better understand how their child’s school rates against others in their area.

“State and local leaders should be making decisions when it comes to education, not the federal bureaucracy,” said U.S. Rep. Todd Rokita, who co-authored ESSA.

“With ESSA, we are already seeing a devolution of power from the U.S. Department of Education to the states. … This means that those who know the students best are making decisions about their education. Accountability is an important aspect of ESSA, but the accountability system is designed by the state, for the state.”

In between No Child Left Behind, which was passed in 2001, and ESSA, passed nearly 15 years later, a state-driven education reform movement took root that sought to create commonality among states, so that a measure of academic success in one state would mean the same thing in another state.

In 2010, more than 40 states, including Indiana and Illinois, adopted the Common Core standards, which were driven by the National Governors Association, and supported in Indiana by then-Gov. Mitch Daniels.

The U.S. Department of Education included those standards as ones that states could use to apply for grants under Race to the Top, an Obama administration initiative in which states competed for grants that totaled $4 billion by showing innovative education reforms.

But that led conservatives, especially those in the Tea Party movement, to link the standards with the grants and begin a campaign to force other states to withdraw. Only three states — Indiana, Nebraska and South Carolina — wound up rewriting their own standards.

In response to the perception that Common Core was a federal program, ESSA forbids the federal government from incentivizing states to select a particular set of academic standards, noting only that states must have “challenging standards.”

Major shifts in kindergarten-through-12th grade education tend to move more like glaciers than rock slides. So the upheaval over the last seven years in Indiana — adopting, rejecting and then developing several sets of academic standards and assessments in quick succession — have been seismic, and frustrating for educators.

In 2014, former Gov. Mike Pence signed legislation withdrawing the state from Common Core and directed education officials to write new math and English standards that would be “uncommonly high” and “written by Hoosiers, for Hoosiers.”

That may help explain why the head of the Indiana State Teacher’s Association, Teresa Meredith, said many of her members know there’s been a change from No Child Left Behind, but may not know the details. What’s important, though, will be the new law’s impact.

“It’s like, here we go again, another change,” Meredith said. “Did anyone really listen to the people on the ground? That creates some anxiety.”

Meredith wants to make sure the schools are creating “independent thinkers” so that students will be successful after graduating from high school.

Indiana’s high school graduation rate over the past 10 years has increased by 10 percentage points to 89.07 percent in 2016, from 78.15 percent in 2006, according to data from the Indiana Department of Education. That increase bodes well for students, but Indiana still is trying to close achievement gaps among student demographic groups.

An independent analysis by the Collaborative for Student Success, called The Honesty Gap, found the state had narrowed the gap between its own proficiency rates and the National Assessment of Educational Progress, a national measure of student achievement, by 18 percentage points in fourth-grade reading, and 29 percentage points in eighth-grade math.

School accountability plans, plus ESSA’s emphasis on educating all students equally, could be a significant factor in eliminating these gaps for good.

“I am glad to see that growth is still factored into the accountability portion of the plan, meaning that schools in more disadvantaged areas will still be recognized for the progress they are achieving as the students in those areas are working toward greater proficiency and higher test scores,” said Sen. Eddie Melton, D-Merrillville.

“As the plan is implemented, we will have a better idea of its effects on our students. But going forward, it will remain critical that we support all of our public schools through adequate funding at the statewide level.”

ESSA requires states to detail when and how they will intervene in schools that are underperforming. How Indiana approaches that will play out over the ensuing months as the state’s plan is under federal review and, following that, will be implemented.

A state-designed plan, though, is likely to inspire educators and other stakeholders to greater success than one imposed by the federal government, said Minnich, of the state school chiefs group.

“Our states have seen this as a road map to developing a strong system that is right for them,” Minnich said. “That’s what this has to be about: not fighting in Washington, D.C., about what’s allowed — but whether kids are doing better.”