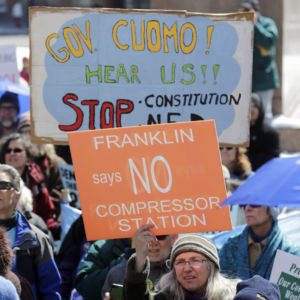 Even After Supreme Court Setback, Still a Way Forward for Constitution Pipeline

On Monday, the Supreme Court put another hurdle in front of the completion of the Constitution Pipeline, denying to hear an appeal of the case from the Second Circuit Court of Appeals in New York. At the heart of the case is a decision by New York state environmental regulators to deny a permit under the Clean Water Act, although federal regulators had already approved the pipeline plan. The Court’s announcement means that pipeline supporters have run out of ways to contest this state decision. Even after their success, environmentalists are not yet announcing victory, though. Despite the setback, this is not the end of the Constitution Pipeline.

“This isn’t the end of the project by any means,” Steve Everley, spokesman for Texans for Natural Gas, told InsideSources. He explained that the company had also petitioned the Federal Energy Regulatory Commission (FERC) to overturn New York’s objection. FERC recently decided to extend its review of the project, a favorable sign.

According to Everley, the history of the Millennium Pipeline last year shows that FERC has already overruled New York regulators after the state denied a water quality permit.

“Last year, New York similarly denied a water quality permit for the Valley Lateral Project (which was proposed by Millennium), but FERC overruled them. New York challenged FERC’s ruling, but earlier this year a federal appeals court affirmed FERC’s decision,”  he explained. “The complaint from Constitution Pipeline is very similar, in that the company is alleging New York waived its authority to deny the permit because it did not act within a reasonable amount of time.”

As a federal agency, FERC has primary regulatory responsibility for pipeline construction. This process includes gathering assessments of potential impacts to historical, environmental, and cultural sites along a proposed route and working with stakeholders to mitigate any potential negative effects. In general, FERC will deny to approve a route because of concerns over specific areas. The builder is then given a chance to amend their proposal to address these concerns before resubmitting. New York decided not to issue a permit on the grounds that an alternate route with less environmental harm might exist.

This has led to concerns that the case represents a new attempt by environmentalist states to subvert federal energy regulatory authority.

“Without a ruling from the U.S. Supreme Court, there is a serious risk that states will use the Second Circuit’s ruling to abuse their narrowly circumscribed [Clean Water Act] authority in their efforts to frustrate interstate natural gas pipeline development at the expense of vital national interests,” the project sponsors said in a statement after the Circuit Court ruling earlier this year.

At the same time, the decision in New York provides a hint at the challenges energy infrastructure projects are likely to face in the coming years, even as the Trump administration makes a priority of supporting domestic energy production.

“Beyond the specific legal ins and outs, the bigger problem here is pretty obvious: Politicians are teaming up with fringe environmental activists to block vital American infrastructure,” said Everley. “What’s worse is that those decisions are so politicized they may be running afoul of the law.”

Daniel Turner, head of Power the Future, a group pushing for increased transparency about the sources and impacts of environmental regulation, agrees.

“New York is the nation’s leader in population loss, and its liberal government and their ideological bent is primarily to blame. Decisions like this hurt the state: it prevents economic growth and job opportunity, and it fosters a climate unfriendly to business,” Turner says. “At a time when Albany should be doing everything in its power to make New York attractive, it’s doing the exact opposite.”

Even after the Supreme Court’s decision, the fight for the Constitution Pipeline will in all likelihood continue for months. If the company is successful in getting FERC approval, pipeline opponents can again challenge the decision in court. In the meantime, compressed natural gas is being taken by truck in “virtual pipelines” from Forest Lake Township, Pennsylvania to another pre-existing pipeline in Herkimer, New York.