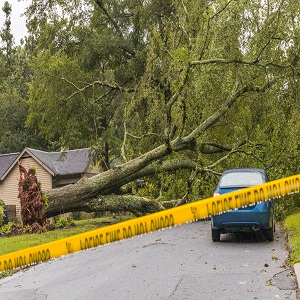 New Hampshire continues to assess the damage from a severe wind and rain storm which left thousands without power while causing considerable flooding and downed trees.

The storm, which lasted from Sunday night into Monday, generated gusts registering at more than 65 miles per hour and produced between two to three inches of rain in certain areas around the state.

The New Hampshire Department of Safety (DOS) issued a press release late on Monday which said the storm caused the fourth-largest power outage in state history. DOS estimated 450,000 Granite Staters lost power during the storm, which is roughly one-third of the state’s population.

ReadyNH, HSEM’s recently launched emergency information service, has been providing official updates to the public throughout the storm and cleanup efforts afterwards. Now, state officials are assisting first responders faced with isolated floodwaters and considering a request for a federal disaster declaration.

Latest Updates on the Damage

The state has made progress since the end of the storm on Monday to address the damage caused to the electrical and transportation infrastructure, especially in the North Country.

HSEM provided an update late Tuesday afternoon saying that 114,000 homes remained without power while an additional 256 roads are closed around the state.

As of Tuesday morning, the New Hampshire Department of Transportation (DOH) says only 32 state routes remain closed. DOH was also able to fully reopen Route 2, which connects to the state-line with Maine. The DOH has actively been inspecting and repairing bridges affected by the storm.

By late Tuesday afternoon, Eversource said it had restored power to 220,000 customers in New Hampshire.

The company urged patience for residents who still have not seen their power restored, telling them to plan on the possibility of not having power for “multiple days.” Eversource also said while many customers will have their power restored in the next few days, they are aiming to restore power to all customers by Friday.

Eversource has continued issuing updates on the situation by the hour but a malfunction in communication irritated residents earlier on Tuesday.

Patrick Hynes, a communications specialist and a former owner of NH Journal, said the episode frustrated him considering he has been without power for over two days.

“This voicemail and Eversource’s general lack of responsiveness makes it pretty clear they don’t care about the customers,” Hynes said. “We’re just a name on a monthly bill. I still have no idea when we will have power again.”

The company, which services three states in New England, said the misstatement to customers had no impact on restoration efforts. Murray said most customers have been understanding given the nature of the storm, which left 1.3 million people in the region without power. He said efforts to restore power could not begin in full until after the worst of the storm passed late Monday afternoon and they were unable to provide an estimated restoration time until today.

Murray said Eversource is still evaluating damaged locations around New Hampshire in order to determine what fixes need to be made and allocating resources appropriately.

Gov. Chris Sununu toured storm damage in Campton on Monday and traveled to Conway and Bartlett on Tuesday, meeting with Granite Staters displaced by the storm. Sununu told WMUR he expects to request a federal disaster declaration of $1.9 million if the state meets the threshold requirement.

In the previous two flooding disasters, the governor declared a disaster approximately one week after the incident and received a response from the president between one to two weeks later.