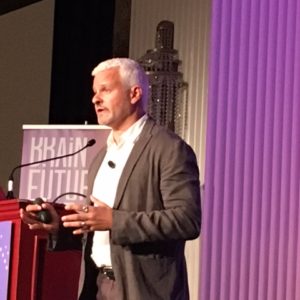 Despite the era of unprecedented opportunity ushered in by a worldwide proliferation of smartphones and internet connected devices, developmental psychologists and neuroscientists are increasingly concerned about the risks to brain health of living a plugged-in life full of pings and other electronic distractions.

Top scientists, psychologists, and researchers are convening for a two-day conference on brain science and brain health at the Gaylord National Convention Center just outside of Washington D.C. Adam Gazzaley, a University of California, San Francisco neuroscientist, and John Ratey, a clinical psychologist at Harvard Medical School, were among the presenters at “Brain Futures,” on Wednesday, the first day of the conference. Both offered the audience intuitive action plans for preserving, or even instilling, high quality cognitive functioning.

Ratey, who has authored two New York Times bestsellers, summarized a mounting body of research that shows that vigorous physical activity has a significant positive effect on brain health. In particular, he cited studies that have shown how exercising staves off cognitive deterioration in the elderly, as well as how physical activity can help students focus more intensely and score better on standardized tests. He also pointed to evidence that exercising counteracts depression and reduces drug and alcohol addiction rates.

The issue is topical in an era when, despite medical advances, increasing numbers of young people are being diagnosed and treated for Attention Deficit Disorder, or ADD, and clinical depression. While there could be many factors at play, medical professionals have long been concerned about the effect of prolonged screen time and the increasingly sedentary lifestyles of millennials.

The reason why exercise could hold the key to reversing these trends, according to Ratey, lies in a protein called brain-derived neurotrophic factor, or BDNF, which increases the more humans exert themselves physically. Ratey referred to BDNF as “miracle grow for the brain” or “brain fertilizer” multiple times through his talk.

In essence, he argued that returning to a more hunter-gatherer style of life, one that is full of exercise, activates BDNF production and leads to increased brain cell growth and activity. Among the numerous examples Ratey pointed to, was a 19,000 student school district in Illinois that received national media attention for putting a major premium on physical education. In addition to slashing obesity rates, the district also saw a spike in student achievement.

While Ratey’s talk focused to some degree on unplugging from devices to find health and balance in the information age, Gazzaley, who followed him on the dais, offered insight into how technology itself can be used to mitigate the effects of a technology-oriented lifestyle. In particular, Gazzaley underscored the potential benefits of brain training and constructive gaming.

In his presentation, Gazzaley underscored the negative impacts associated with the staggering amount of multi-tasking that people engage in today, but also noted that the “genie is out of the bottle” when it comes to technology in our daily lives. While behavior modification techniques can be employed to curb some of the addictive tendencies that have young people scrolling through their Twitter feeds at all hours, he made the case for “enhancing cognition” strategies that make the brain better at multitasking.

Gazzaley is not the first to advocate this approach. The tech startup Lumosity famously had to pay a major fine to the Federal Trade Commission for deceptive advertising related to its “brain training” software. The widely publicized case has put a damper on what was a burgeoning industry that claimed it could increase cognitive performance and forestall degenerative diseases like Alzheimers.

However, Gazzaley seems undeterred by the negative headlines. He has had a leading role in designing other “gameified” brain training software that landed in Nature magazine and has been found to improve functioning in 60 to 85 year olds.

Since that success, Gazzaley has founded a new brain science gaming studio, Akili Interactive Labs, that is in the process of developing video games that may be useful in diagnosing and treating brain disorders such as ADHD. The next big title the group is working on, called Project EVO, is being tested in clinical studies and could be released as soon as next year, he said.

“[Project EVO], if approved, would be the first non-drug treatment of ADHD, and the first prescribable video game—at least that I’m aware of,” said Gazzaley.

Other presentations, such as the keynote delivered by University of Toronto psychiatrist Norman Doidge, delved into the technical details outlining the latest in holistic approaches for rehabilitating patients with seemingly incurable conditions like Alzheimers, Parkinsons, Multiple Sclerosis, and Traumatic Brain Injuries. Doidge offered convincing evidence that neuroplasticity—or the brain’s ability to transfer vital functions from impaired regions of the brain to healthier regions—can be harnessed to counteract conditions once thought to be chronic and debilitating.

On Thursday, the conference will break out into three tracks, with a series of events focusing on the last in brain medical treatment, aging, and youth education.