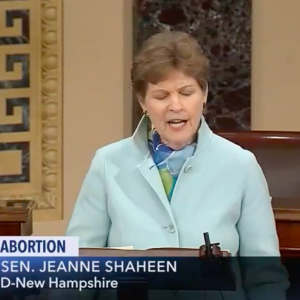 On Monday, Sen. Jeanne Shaheen took to the floor of the US Senate to speak out against the Born-Alive Abortion Survivors Protection Act.  According to its author, Sen. Ben Sasse (R-NE), “this bill… would simply require doctors present during a botched abortion — an abortion that results in the birth of a living infant — to provide the same level of care that would be offered to any other baby at the same stage of development.”

“It would significantly interfere with the doctor-patient relationship and it would pose new obstacles to a woman’s constitutionally protected right to make her own decisions about her reproductive health. Regardless of what the intent of the legislation is, the fact is the way it is written, it intimidates doctors with the threat of criminal liability for performing safe and legal abortion. It will have a chilling effect on the ability of women to access the services they need in the United States.

“We must always remember that abortions that are performed later in pregnancy are most often done as the result of severe fetal diagnoses and the serious risks that that pregnancy poses to the life of the mother.”

“New Hampshire is one of the most abortion-friendly states in the country,” McGinley says. “Abortions are legal, unrestricted, and unregulated throughout all 40 weeks of pregnancy.” 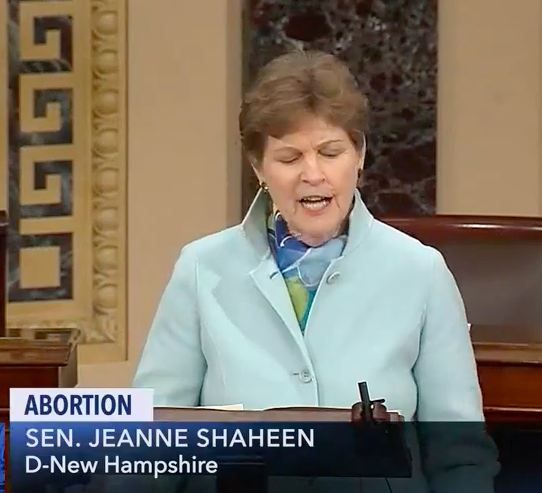 But is Sen. Shaheen right about the “Born Alive” act she and Sen. Maggie Hassan voted against?

No. In fact, it doesn’t place any restrictions or requirements of any kind on the patient–assuming that by “patient” Shaheen means the mother.  There isn’t a single regulation or restriction that applies in any way to the woman receiving the abortion, or how or when the procedure itself can occur. Instead the bill simply says:

(1) If an abortion results in the live birth of an infant, the infant is a legal person for all purposes under the laws of the United States, and entitled to all the protections of such laws.

There are no requirements that involve the relationship between the doctor and the mother. Sen. Shaheen’s claim is factually incorrect.

Once again, no. Because it puts no restrictions of any kind on abortions and only applies to newborns who survive them, there is no “obstacle” for women seeking abortions. The only decisions it impacts are those made by the doctor in those rare occurrences when the infant survives.

No. The only criminal liability is for the doctor’s treatment of a newborn after the abortion. Once again, the act places no restrictions or regulations on abortion whatsoever. However, if the doctor does what Gov. Ralph Northam described earlier this year while explaining Virginia’s legislation– allowing the newborn to die, or actually euthanizing it — that doctor “shall be punished as under section 1111 of this title for intentionally killing or attempting to kill a human being,” under the act.

According to the Guttmacher Institute, the respected pro-abortion-rights health research organization, no. And researchers at the University of California–San Francisco report that “most women seeking later terminations are not doing so for reasons of fetal anomaly or life endangerment.”

Definitive data is difficult to come by, and some states (including New Hampshire) don’t collect data on abortions, but based on the evidence available, Sen. Shaheen’s claim is factually incorrect.

In the end, Senators Shaheen and Hassan joined 42 other Democrats in voting against requiring doctors to give newborns who survived an abortion “the same level of care that would be offered to any other baby at the same stage of development.”  It’s a difficult vote to defend, but an accurate grasp of the facts is likely a good start.