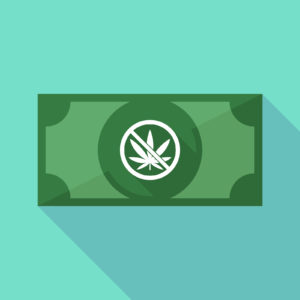 Since California became the first state to legalize medical marijuana more than two decades ago, the legal cannabis industry has grown in leaps and bounds. Retail sales in 2016 totaled more than $6.5 billion and sales have only grown since then, as voters in California, Nevada, and Massachusetts passed legalization measures at the ballot box. Legal cannabis businesses are regulated and taxed at the state and local level and have spawned support industries offering specialized advertising and other business services. Even so, the industry lacks access to one of the most fundamental business needs: a bank account.

On Thursday, the Federalist Society released a short film showing the difficulty marijuana businesses have accessing financial services since federal law means banks risk being charged with money laundering if they offer loans to cannabis companies.

“If a bank accepts money knowing that it came from an illegal business, like even a state legal marijuana business, that violates federal banking laws,” said Julie A. Hill, a professor at the University of Alabama School of Law, who has written about the issue.

Prohibitions on handling drug money are part of some of the most foundational legislation governing American banking.

“The Federal Credit Union Act and the Federal Deposit Insurance Act are the laws that effectively allow, mechanistically, for the financial institutions of the United States to work,” said John Hudak, a senior fellow in governance studies at the Brookings Institution.

“With those laws come the regulations that banks and other financial institutions must abide by. They forbid working with drug cartels, drug dealers, and really any business that works with drugs,” Hudak, continued.

This means that a bank or credit union holding accounts for a legal cannabis business risks facing federal money laundering charges. Thus far, the only thing preventing such lawsuits has been a lack of will on the part of federal prosecutors. After the revocation of the Cole Memo earlier this year, the cannabis industry is even more concerned. The Cole Memo was an Obama-era document directing the Department of Justice not to prioritize enforcing drug prohibition in states that voted to legalize and tax marijuana.

Some states have already tried to address the problem by creating their own financial institutions. However, this approach does not fully escape the FDIC trap, explained Hill, who described how difficult it is to operate a financial institution that could circumvent federal restrictions on cannabis loans.

“Even if you are a state-chartered credit union or bank, you probably still have federal insurance. Nearly all banks do and almost all credit unions do and because the federal government is providing deposit insurance, they believe they should have a say in whether the banks are operated in a safe and sound manner,” she said.

“Of course, when they start thinking about safety and soundness, they think about all sorts of things, including whether the bank does any any activities that post a reputational risk… If you do anything they consider unsafe or unsound, they can tell you to stop doing it and if you don’t, they can take away your deposit insurance, which effectively closes your bank,” she continued.

Banks that fail to report suspicious activities also run the risk of facing fines or other forms of retribution.

Add in the fact that connections to illegal drugs could open up a bank to Treasury Department investigation and it is understandable why most financial institutions would rather leave the marijuana industry be. Federal regulations make banks unwilling to risk their survival by offering services to marijuana businesses.

So far, the legal cannabis industry has been operating in a gray area. This has made taxation and regulation of the industry more difficult and has created safety risks as many businesses operated in cash and were at a higher risk of robbery.

The problem is evident, but solutions are hard to come by. Legalization would certainly solve the issue, but has had little traction on the Hill. Another potential solution would be to reschedule marijuana, stopping short of full legalization, but allowing for it to be prescribed. This would make medical marijuana dispensaries legal and eligible for traditional loans. In addition, this would allow growers access to traditional capital markets if they exclusively supplied medical facilities. Congress could also amend banking legislation to allow cannabis businesses access to accounts.

Despite the need for federal legislation, so far, Congress has dragged its feet on the issue. In January, a group of attorneys general representing eighteen states and the District of Columbia, sent a letter to congressional leaders from both parties urging them “to advance legislation that would allow states that have legalized medical or recreational use of marijuana to bring that commerce into the banking system.”

“The grey market makes it more difficult to track revenues for taxation purposes, contributes to a public safety threat as cash intensive businesses are often targets for criminal activity, and prevents proper tracking of large swaths of finances across the nation,” the letter said.