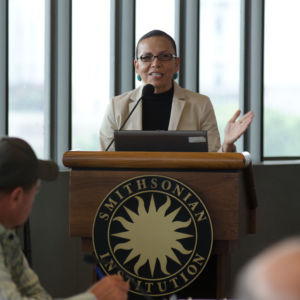 Few members of the Standing Rock Sioux have as many ties to Washington, D.C. as Jodi Gillette, the sister of the tribe’s chairman, Dave Archambault II. When Gillette retired from her position in the Obama White House, Bismarck’s paper wrote that “Jodi Gillette probably has been more involved in the Obama administration than any other North Dakotan.” Now these ties are the subject of a Freedom of Information Act request seeking to see if she used her ties to the administration to influence decisions about the Dakota Access Pipeline.

On Tuesday, the Center for Individual Freedom filed a Freedom of Information Act request seeking “ all records since February 1, 2016, related in any way to the Dakota Access Pipeline (DAPL) and Jodi Gillette,” including emails, visitor logs, and meeting minutes.

“There have been a lot of rumors about the backroom dealings that led to the Administration’s decision to not issue the final easement for the Dakota Access Pipeline,” said Timothy Lee, CFIF’s Senior Vice President of Legal and Public Affairs, who filed the FOIA request.

“We would hope that the self-purported ‘most transparent Administration in history’ would provide the American people with the background and information that went into this important decision to halt an infrastructure project that had already been approved and was more than 90 percent complete,” he continued.

Lee says that CFIF is continuing to review other potential FOIA requests.

CFIF is a nonpartisan nonprofit based in Virginia that seeks to promote individual rights, personal freedom, and the rule of law. It does not have many prior ties to the pipeline issue. Prior to filing the FOIA request, the group had only published a single blog post by Lee on the pipeline protests, which asked “When is enough enough?”

The request seeks to shed light on what communications, if any, Chairman Archambault had with Gillette, prior to the Army Corps decision this fall to halt construction pending an environmental impact review.

Gillette has strong ties to the Obama administration. In 2008, she worked for the Obama campaign, running a program called the North Dakota First American Vote, a get-out-the-vote effort focused on increasing reservation turnout. After the election, she was appointed deputy associate director of intergovernmental affairs, a role that made her a liason between tribes and the White House.

In 2015, Gillette stepped down from her White House role to accept a new position as policy adviser at a Washington, D.C. law firm which specializes in representing tribes and tribal governments before Congress and federal courts.

“There are now vocal concerns one Tribal Chairman’s sister has exercised her influence as a White House staffer and a Department of Interior’s Bureau of Indian Affairs executive to actively thwart the authorization of federal law enforcement reinforcements,” Thompson wrote. “If true, this behavior warrants a formal investigation of those complicit in aggravating this situation.”

Thus far, the federal government has resisted providing the state with money or manpower to help maintain the peace at the protest site. Until documents are released, it is unclear what influence, if any, Gillette exerted over either the decision to deny the final easement or to block law enforcement aid.