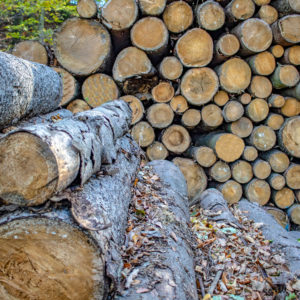 For Some Green Activists, Trees Are the New Black

For some green activists, trees are the new black. Coal black.

“BURNED: Are Trees the New Coal” is a film being promoted by the Dogwood Alliance, a self-declared environmental activist group waging war on the forestry and timber industries with the message “The US must cut emissions, not forests.”

“The rate and scale of logging in the Southeastern U.S. alone is approximately four times that of South American rainforests,” Danna Smith, executive director of the Dogwood Alliance, wrote in a recent op-ed. “We don’t have time now for…industry delay tactics or green smoke screens. The large-scale industrial logging of forests in the U.S. poses one of the largest threats to climate progress.”

The goal of the Dogwood Alliance, the John Muir Project and similar organizations is to paint the forestry and timber industries as the clear-cutting equivalent of Big Oil. They argue harvesting trees endangers the planet and releases the carbon captured by forests (“carbon sinks”) into the atmosphere, adding to global warming. Their only problem? Virtually all of their claims are factually dubious at best.

“There is more forest area in the United States today than in the year 1900,” Patrick Moore told InsideSources. Moore is one of the founders of the Greenpeace movement and former president of Greenpeace Canada. “And it is the commercial forestry industry that keeps planting the new trees. Why? Because they are valued.”

Official government sources back up Moore’s claims. According to the United States Forestry Service, America’s low point for forested land was around 735 million acres in 1920. By the year 2000, that number was up to 749 million and has remained near those same levels for decades.

As the Forestry Service reports, “Forest area has been relatively stable since 1910, although the [human] population has more than tripled since then.”

This is because the private sector owns a huge percentage of wooded area in the American South—known as the nation’s “wood basket”—and it is managed to maximize market value. As a result, the land is carefully tended, trees are harvested and then replaced. Forestry-related businesses support more than one million direct jobs, which are associated with over $55.4 billion in direct payroll, according to the National Alliance of Forest Owners.

This is precisely the activity organizations like the Dogwood Alliance oppose, claiming it’s “disturbing” the carbon-capturing attributes of woodlands. “Forests play a vital, yet often misunderstood, role in solving the climate crisis,” Smith writes. “When disturbed, they release carbon, but when left to grow they actively pull carbon out of the air and store it.”

But when new trees are planted, don’t they eventually absorb the carbon released by “disturbing” the forests?

“Exactly,” Moore told InsideSources. “And the wood that’s harvested and used in construction maintains that absorbed carbon in a sequestered state. Then that lumber is replaced with newly planted trees that absorb even more carbon.”

But what about when wood is used as a power source? Biomass involves burning massive amounts of wood to heat water to create steam and generate electricity. According to the Dogwood Alliance, “When trees are cut down and burned to generate biomass electricity under the guise of renewable energy, 100 percent of the carbon is emitted. Incinerating wood for energy emits even more CO2 than burning coal, for equal energy produced.”

However, biomass relies on the lowest-quality wood. The best wood goes to saw mills, but the small, crooked, and rotted wood that would otherwise be left to rot is used in biomass. Clearing the forest tract allows it to be quickly replanted.

The problem the anti-logging activists face is that many of their allies in the green community who are trying to shut down the expansion of natural gas, end fracking and force Americans onto a green energy grid also support biomass as an alternative energy source to replace the fossil fuel power they oppose.  In fact, the U.N.’s Intergovernmental Panel on Climate Change (IPCC)—the gold standard for climate-change activism—explicitly promotes biomass as a viable, environmentally-friendly power source.

“Land already in use could feed the world in a changing climate and provide biomass for renewable energy,” wrote Hans-Otto Pörtner, Co-Chair of IPCC Working Group II.  Many states, like New Hampshire, include wood-burning biomass power in their “Renewable Portfolio Standard” to meet their green-energy goals. In fact, biomass power, which is more expensive than electricity from nuclear, coal and natural gas, is often subsidized by ratepayers, all in the name of renewable energy.

Even Sen. Ed Markey (D-Mass.), best known as a sponsor of the Green New Deal legislation with Rep. Alexandria Ocasio-Cortez, supports biomass as an alternative power source as part of the war on carbon.

In the end, the green activists have gotten the forestry issue exactly backward. Biomass used for power displaces coal, natural gas and other fossil fuels — keeping that carbon in the ground — while sustainable forestry practices create incentives to grow more trees, which sequester even more carbon.

Indeed, the United States Department of Agriculture reports that “during the past 60 years, net growing-stock growth has consistently exceeded growing-stock removals in the United States.” In other words, we grew more forest each year — by around 1.5 times — than the amount harvested per year. In the Southeast, that ratio is closer to 1.8. And the amount of forested acres in the U.S. increased from 754 million acres to 766 million between 2005 and 2015.

Anti-forestry activists like to point to a Yale-led study estimating that the number of trees has fallen 46 percent since the beginning of human civilization, but they overlook the fact that the estimated 3 trillion trees on Earth are, according to that same study, seven and a half times more than previous estimates.

The re-forestation of the United States, Canada and Western Europe is one of the untold stories of environmental success. Too bad some green activists have decided to turn it into a lump of coal.