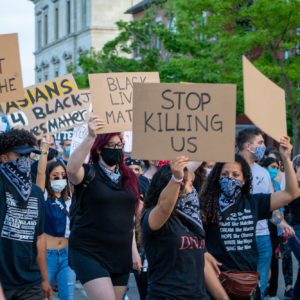 New Hampshire Health Commissioner Lori Shibinette told NHJournal Friday that, unlike her fellow health officials at the state and federal level, she would not issue a formal statement warning of the health risks posed by Black Lives Matter protests in her state. The commissioner’s stance is yet another example of the Sununu administration’s decision to support the protests over public health concerns.

Since the mass rallies began in the wake of the killing of George Floyd at the hands of Minneapolis police, public health experts nationwide and in New Hampshire have warned that they could be, as Minnesota Health Commissioner Jan Malcolm put it, “a recipe for spread.”

Rhode Island’s Gov. Gina Raimondo is sending health officials to rallies to distribute masks and warn of the risks of infection. On Thursday, CDC chief Robert Redfield said of the protest movement, “I do think there is a potential, unfortunately, for this to be a seeding event.”

And Dr. Anthony Fauci, the national face of the fight against coronavirus, called the protests “a perfect set up for further spread of the virus.”

“Obviously, not only are they congregating physically close to each other but often when they start screaming and demonstrating—which part of the process of demonstrating, I’m not criticizing that—but I’m saying what it’s going to be leading to is the likelihood that you might have situations where you will foster the spread of the infection, and that’s really of concern,” Fauci said.

But Gov. Sununu and his administration have taken a different tack, openly encouraging participation in protests that have regularly involved more than 1,000 people congregating in Granite State streets and parks.

Asked whether she would issue guidance to protesters in New Hampshire, Shibinette said:

“The rallies and the protests, we consider in the same grouping as any type of large congregate groups or crowds, so we’re not going to issue a formal statement. But we will definitely say if you think you’ve been at risk for exposure to COVID, whether it’s at a protest or a beach or a restaurant or anywhere else, if you think you’ve been exposed, then you should get tested.”

More than 1,000 people gathered for a Black Lives Matter protest in Portsmouth, NH on June 4th, 2020.

Gatherings of 10 or more people are still prohibited under Gov. Sununu’s stay-at-home executive orders until June 15. On Friday, the governor announced the state will modify or end many of those restrictions as of June 15 — indoor restaurant dining will be allowed, for example — but amateur and youth sports groups will still be limited to 10 people working out together.

Health professionals have noted the clear contradiction in these policies.

“Unfortunately, the whole nature of protesting is a group endeavor, so all of the requirements for social distancing are not typically followed,” Alexandra Howell, a professor of medicine, microbiology and immunology at Dartmouth, told the New Hampshire News Collaborative.

Even Gov. Chris Sununu’s own state epidemiologist, Dr. Benjamin Chan, said last week that he could not encourage attendance at these rallies amid a viral pandemic. “It’s important for everybody to really continue with the social distancing recommendations,” Chan said.

Sununu and other supporters of the rallies frequently urge attendees to wear masks, but as Howell points out, the events aren’t conducive to safe behavior.

“I think that if they wore masks that would be preferable, but it’s difficult to understand speech when one is wearing a mask, so I think that the whole nature of demonstrations just puts people who demonstrate at greater risk of transmission and catching COVID,” Howell said.