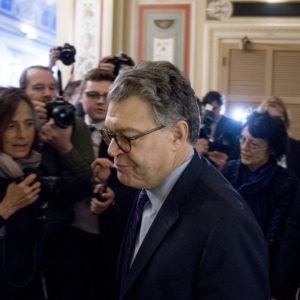 Franken Resignation Could Set Up a ‘Minnesota Massacre’ in 2020

Minnesota may soon be down a senator, another casualty of the flurry of sexual assault allegations that have struck first Hollywood and now Washington, D.C. On Thursday, in the face of an increasing number of sexual misconduct allegations and mounting pressure from fellow Democratic senators, Senator Al Franken (D) announced that he would be resigning. The resignation sets into motion a series of events that have the potential to influence Minnesota politics at both the state and national level, with particular consequences for the 2018 election.

Franken chose his words carefully, saying that he was proud to have used his time in the Senate to “champion women.”

“Today I am announcing that in the coming weeks, I will be resigning as a member of the United States Senate,” Franken said on the Senate floor. “It’s become clear that I can’t both pursue the Ethics Committee process and at the same time remain an effective senator for [the people of Minnesota].”

Many observers noted the odd phrasing of Franken’s remarks, specifically the fact that he announced his intent to resign, rather than actually resigning.

“I think Franken is attempting a super-Clintonian dodge,” writes Steven Hayward, a political scientist and commentator who follows Minnesota politics. “He had to address the immediate firestorm, but he’s probably holding out for Roy Moore to win the election in Alabama next week, be seated in the Senate by the Republican majority, and then Franken may try to rescind his promised resignation, the storm having blown over and attention shifting to the baggage of [Republican Senate candidate Roy] Moore.”

For the time being, Minnesota politicians are preparing for a new appointment. Under state law, filling the seat will fall to Democratic Governor Mark Dayton. Dayton’s appointment would serve until 2018, when a special election would be held to finish out the final two years of Franken’s term, which ends in 2020.

This will make for a crowded ticket. Minnesota’s other senator, Democrat Amy Klobuchar, is up for reelection in the 2018 as well. It will also be an open race for the governor’s mansion, since Dayton has already announced that he will not be seeking reelection. This sort of electoral trifecta last appeared on a Minnesota ballot in 1978, a year later dubbed the “Minnesota Massacre.” In a surprising turn of events, Republicans captured all three seats.

In addition, stacking the races makes Dayton’s choice of a replacement for Franken all the more difficult. One of the leading candidates to take over Franken’s seat is Lieutenant Governor Tina Smith (D). Smith served as Dayton’s chief of staff before being elected to her current position. She was previously considered a front-runner for the Democratic nomination for governor next year, but had said that she was not interested in running. Dayton, who has suffered from ill health in recent months, has increasingly come to rely on her.

Should Smith be appointed, the role of lieutenant governor would fall to the president of the state Senate, Republican Michelle Fischbach. Not only would this trigger an additional special election to fill Fischbach’s seat, it would also leave Minnesota with a split executive branch. Republicans already control both houses of the state legislature and have been feuding dramatically with Dayton over tax and spending cuts.

Democratic Attorney General Lori Swanson’s name has also been suggested. Swanson would please those arguing that Dayton should appoint a woman to the seat in light of the allegations against Franken. Swanson has said before that she will run for office in 2018, but had not yet decided which office she would seek. Her name recognition in the state suggests that she would be a strong candidate for whichever race she chooses.

As of yet, Dayton has not made any announcements about who he might pick or when he might make a decision.

“Events have unfolded quickly; thus, I have not yet decided on my appointment to fill this upcoming vacancy,” Dayton said in a statement. “I expect to make and announce my decision in the next couple of days.”

On the Republican side, the prospect of a sooner than expected Senate race is also starting candidacy rumors. The party has not won a state-wide race since Tim Pawlenty was re-elected governor in 2006. Names being considered at this early stage include Norm Coleman, the senator defeated by Franken in a contentious 2008 election, U.S. Reps. Erik Paulsen and Tom Emmer, as well as State Senate Majority Leader Paul Gazelka, and House Speaker Kurt Daudt. Any of these candidates would need to quickly come up with about $15 million in campaign cash to compete for the seat.