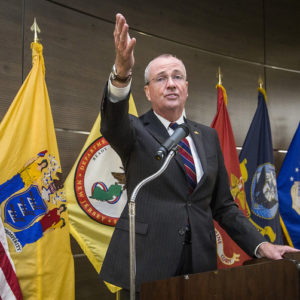 A free-market group founded by veterans of the Reagan administration released a report card on how America’s governors are handling the coronavirus crisis and its impact on the economy.

The Committee to Unleash Prosperity, created by economists Art Laffer and Stephen Moore, along with publisher Steve Forbes, is open about its pro-business approach.

“The premise of this report is that — with a few exceptions in some metropolitan areas — the time is long past for every state to reopen safely, smartly, and judiciously so as to end the economic destruction and despair from lockdown,” they write in their new report, Grading Our Governors: A Report Card on Reopening States’ Economies.

The highest scores went to Jared Polis of Colorado, Ron DeSantis of Florida, Brian Kemp of Georgia, Kim Reynolds of Iowa, Pete Ricketts of Nebraska, Kevin Stitt of Oklahoma, Kristi Noem of South Dakota, Bill Lee of Tennessee and Mark Gordon of Wyoming — who all received an A.

The governors who got an F and “put their states in most economic peril” are Phil Murphy of New Jersey, Tom Wolf of Pennsylvania, Ralph Northam of Virginia and Tony Evers of Wisconsin.

When asked whether the governors who received Fs had anything in common, Moore, one of the report’s authors, was pretty adamant.

“It is interesting to me — and disheartening, actually — that the response to coronavirus and the reopening of our economy has become so hyper-partisan,” Moore told InsideSources. “You look at those states like New Jersey — they have a pretty liberal Democratic governor — and then you look at states like [Governor] Wolf in Pennsylvania, a very liberal Democratic governor, Wisconsin with a very liberal governor and they’re creating economic problems for their citizens.”

“We are in the midst of one of the greatest economic downturns in our country’s history,” Moore said during a conference call. “We all hope that it’s very short-lived.”

“I believe the summer is going to be very tough, very tough for the country,” he said. “We’re going to have prolonged unemployment through June and July, but we do think that by mid-August or so we can see a recovery that starts to feels like a recovery… when unemployment starts to fall and we start to see more jobs created and we see businesses back up as usual. So it’s going to be a very rough process.”

Moore said one of the reasons for the report was “our analysis shows quite clearly that the states that open up the soonest and the safest — and Iowa, Georgia and Oklahoma are three examples of states that are doing that — will have much swifter and stronger recoveries than states that stay closed.”

“And the major reason for that is because businesses cannot go another month without revenues,” Moore said. “Most states — like the state I’m in right now of Virginia — if they stay closed for another month… you’re going to have body bags of businesses that will never recover.”

The report measured the start dates for reopening in each state “as the evidence is very strong that states with late start dates will have much more severe recessions than states that open earlier.”

Moore said we’re going to look back years from now and realize how we handled the coronavirus was “stupid.”

“I think we just weren’t smart about this and now let’s get smart about it,” he said. “One thing we do know about viruses and pandemics is that they are urban, because diseases are passed through areas with high-population density, so New Hampshire doesn’t need the same rules as Boston does.”

The report considered the severity of the coronavirus in each state and the need to keep citizens safe and healthy, but also assessed “how measured or damaging their actions have been with respect to safeguarding their economies.”

The study measured lockdown orders, business closures, hospital and outdoor activity orders, and the degree of punitive actions on enforcing these measures.

Kemp, Reynolds and Stitt — who Moore called the three “superstars” — also participated in the news conference and each delineated the way they are bringing their economies back from the precipice of devastation.

Reynolds explained what Iowa has been doing, which also reflected on comments made by Kemp and Stitt.

“I’m really proud of Iowans for doing their part over the last few months to mitigate Corona’s spread and that’s allowed us to begin to ease some of the mitigation efforts in a staged, responsible and safe approach,” Reynolds said.

“The reality is we can’t stop the coronavirus, it’s going to remain in our communities until we have a vaccine available,” she said. “So, we have to learn to live with it without letting it govern our lives.” 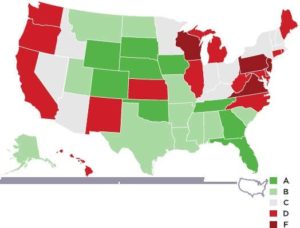 The report also notes that keeping states closed can lead to health problems not directly linked to the coronavirus.

“This report assesses how well each governor is responding to this increasingly undeniable reality that America faces an urgent imperative of limiting the health and economic catastrophe caused by lockdowns,” the report says. “Those who don’t agree with that assessment are free to discard these grades. Those who do should pay careful attention to how their governors are performing.”