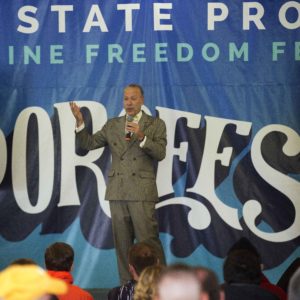 In this photo taken Wednesday, June 22, 2016 Jeffrey Tucker speaks the Libertarian Porcfest at Roger's Campground in Lancaster, N.H. Hundreds of people from across the country are attending the event which hopes to convince 20,000 to move to New Hampshire. (AP Photo/Jim Cole)
News

How the Free State Project Is Influencing New Hampshire Politics

When Jason Sorens, Ph.D., conceived the Free State Project (FSP) in a July 2001 essay in The Libertarian Enterprise, he was a 24-year-old graduate student at Yale University.

In the essay, Sorens advocated a libertarian migration, in “which freedom-minded people of all stripes…establish residence in a small state and take over the state government.” Sorens anticipated another person or organization would take the helm of the movement’s ideals.

Now a lecturer at Dartmouth College, Sorens remains at the core of the movement, serving as chairman of the board for FSP.

The movement grew after the essay’s publication, beginning to collect signatures on its Statement of Intent in September of 2001. By 2003, FSP had collected 5,000 signatures, which led to a vote on which state the movement would migrate to once the organization gathered 20,000 signatures. New Hampshire emerged as the winner, supported by more signers than any other state, and receiving the endorsement of former Republican Gov. Craig Benson, who signed up as a friend of FSP.

FSP announced it received 20,000 signatures in February of 2016, which triggered the move. As of September of 2017, Sorens said 2,000 people have already moved to New Hampshire. Sorens said he doesn’t expect everyone who signed up to move, given the logistical challenges involved. He said the organization is investing resources in contacting those on the list.

Sorens described FSP as an “educational organization” and a “social network” rather than a “political entity.” He said FSP’s goals reach beyond policy achievements, focusing on teaching people about liberty, as well as how to do things. This includes offering dance classes, farming lessons, tips for getting off the grid, and information on home-buying.

“If we build the liberty community here significantly, it’s going to eventually result in a much freer society and ultimately build a social community that’s also very important for those who come here,” Sorens said in an interview with NH Journal.

Operating in a Decentralized World

Sorens said his inspiration came from what he saw as a change in the public’s attitude toward globalization and free markets. According to Sorens, while most countries have gone from a federal centralization to regional governance, the U.S. has seen a shift in the opposite direction. He said factors affecting the U.S. are its size and deep political polarization.

There are approximately 20 FSP participants in the state legislature, according to Sorens. This includes a mix of Democrats and Republicans.

Sorens said FSP has received hostility from the Granite State political establishment, including sign-waving and letter-writing campaigns against candidates in both political parties. He said establishment party leadership is going to resist those who will “upset the apple cart.”

Sorens, however, said he has never been approached by either party to dissuade FSP candidates from running in races where they might affect the results.

Last year, Aaron Day, an FSP participant, ran as an independent in the U.S. Senate race between incumbent Kelly Ayotte and Gov. Maggie Hassan. Sorens said he analyzed the numbers and believes Day’s candidacy tipped the election in Hassan’s favor by siphoning votes away from Ayotte.

Sorens said disagreements still remain between participants of the movement on how FSP should approach elections, including whether to run as a third party or participate in the two major parties.

Sorens said FSP is not trying to “take over the state,” as critics charge, noting the organization does not have the numbers to accomplish that feat.

“What we’re trying to do is seed the conversation about ideas in this state,” Sorens said. “We’re trying to bring new ideas to floor about state and local policies. If they’re good, they’ll stay; if they’re not, they’ll fall by the wayside.”

Among those ideas are limiting civil asset forfeiture, an issue that received attention after a FSP participant in the legislature introduced a bill requiring a criminal conviction before forfeiture. The bill was signed into law in 2016.

The Evolution of a Movement

Sorens said FSP changed its modes of activism to be more effective over the years, rather than simply promoting civil disobedience to trivial issues. He explained the movement’s porcupine logo, a play on the Gadsden Flag, as an emphasis on supporting non-aggression and the use of law as a defensive method.

The movement has worked to “police its boundaries” for radical elements, according to Sorens.

Chris Cantwell is a white nationalist who was charged with three felony charges in connection with the violence surrounding the Unite the Right rally in Charlottesville last month. Cantwell was formerly a participant of FSP before being expelled by the board in 2013 after calling for violence against the government.

Sorens said FSP saw Cantwell “for what he was” years ago, and he was one of a handful who have been expelled for violating the movement’s standing policy to condemn violence and bigotry. Expelled participants are banned from attending FSP events and are ostracized by other participants, which Sorens said helps the movement maintain a character of openness and tolerance.

Reflecting on 16 Years of FSP

Sorens has few regrets about the movement.

In his original essay, Sorens analyzed the idea of political migration and possible secession to leverage influence. Sorens said the correlation between secession and FSP became a lingering point of criticism, one which he said he would have handled differently.

Sorens also said he would have held the vote selecting a destination closer to when the movement achieved 20,000 signatures, believing it would have remained a bigger story in the media.

Sorens said he envisions FSP becoming even more decentralized in the future, though it will remain a formal organization until at least in 2022, the end of the five year moving window. Sorens said FSP will then reassess whether to continue having a formal operation or turn its goals over to specific organizations.