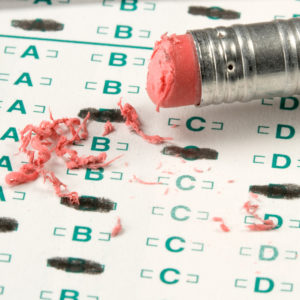 From PARCC’s Ashes, a New Model for Interstate Collaboration Emerges

In Austin, a city best known for its vibrant live music scene and a burgeoning tech culture, a little-known education startup is making a Texas-sized gamble that it can disrupt the hyper-political, ever-changing, billion-dollar business of standardized testing.

Depending on who you ask, Arthur VanderVeen, 56, was either awarded or saddled with the responsibility of restructuring the Partnership for Assessment of Readiness for College and Careers (PARCC), a multi-state consortium created to design a next-generation math and English test. Nine years ago, more than two dozen states adopted the test, intrigued by its ability to make cross-state comparison of student performance possible, and eager to realize the benefits of economies of scale.

The experiment failed (next year, only the District of Columbia and Department of Defense Education Activity will administer the original, full-form test), but the premise on which is was built – that cost-savings and value are highly important considerations for states in the development of K-12 assessments – lives on in the DNA of New Meridian, a nonprofit formed by Mr. VanderVeen.

Observers say as chief executive, Mr. VanderVeen has demonstrated a deft touch in marketing his company’s offering among a patchwork of parochial state education establishments, steadily transforming the wreckage of the bygone consortium into a promising assessment services company primed for growth.

Mr. VanderVeen, a trim, six plus two-inch footer with salt-and-pepper hair, said in an interview that after two decades of experience with education assessment and technology organizations, he feels uniquely prepared for the challenge of building a new model for assessment services.

Whether he succeeds will depend largely on his ability to salvage and repurpose the defunct consortium’s most valuable commodity: a repository stocked with thousands of costly test questions and high-priced performance tasks.

“There was a time when all of the rigorous, student-centered test items in this item bank existed to support a single test,” said the soft-spoken Mr. VanderVeen, explaining how his new model differs from the failed model that preceded it. “Now, the item bank itself is the offering. Our customers basically have unfettered access to it.”

A decade ago, Mr. VanderVeen was a senior official in New York City Department of Education, where he oversaw assessment innovation. He helped nearly 180 city schools transition to computer-based formative and adaptive assessments – tests that better support individualized instruction. Along the way, he became a zealous advocate of “authentic, personalized learning experiences” in which testing plays just one part – albeit an important one – of a holistic learning experience.

The challenge, he says, is that it’s prohibitively expensive to produce tests that align with rigorous standards.

It’s a lesson some states have learned the hard way.

Five years ago, after Tennessee lawmakers had endured months of political backlash over Common Core State Standards, the state legislature responded by abruptly voting to extricate the state from the testing consortium. It immediately embarked on a plan to create a new test under an expedited timeline – pressuring a new vendor to reduce the normal two-year development cycle to a single year. The state committed an astonishing $108 million to the ambitious plan, but what ensued was more than three years of disruptions and interruptions, system-wide outages of its online testing platform, a year without any testing at all, tens of millions in unexpected cost overruns, and in general, systemic chaos.

“We’re tired of it. The state’s tired of it. Our teachers are tired of it, and most of all our students are suffering,” remarked state Rep. Ron Lollar last year. “The faith in the system is not there.”

Analysts say the go-it-alone challenges that engulfed Tennessee are not atypical. For small- and medium-sized states in particular, where student populations are too small to generate the benefits of economies of scale, test creation is labor-intensive, time-consuming, and costly.

By far, the most prohibitive aspect of custom test creation, say assessment experts, is the process required to produce performance tasks or test questions that accurately measure critical thinking, reasoning, research, and writing skills. Questions must be produced by committees of qualified educators, reviewed for clarity and unintended bias, and field tested to ensure they perform as intended. Once a question makes it into an assessment, it has a limited shelf life before it must be replaced with another.

Production cost for a test item can vary widely, depending on the subject matter and its complexity. But generally, the minimum cost to develop a question is several thousand dollars.

He’s making all of them available to states through licensing agreements, to be used to create custom tests, or to partially or fully populate any number of unique, state-specific assessments including not only end-of-year tests mandated by federal law, but also formative and adaptive tests, such as the one Mr. VanderVeen helped develop as an official in New York. The revenues generated by those agreements are, in turn, being used to sustain and refresh the item bank.

“Virtually every state is striving to create good assessments – authentic, coherent content that not only connects to what students are being taught in the classroom, but also models complex and creative thinking,” says Mr. VanderVeen. “Sharing this valuable content with other states through a secure, shared item pool makes a lot of sense – both financially and academically.”

Still, critics of the experimental model say states assume significant risks by developing assessment systems with content they don’t own.

That concern is not lost on Mr. VanderVeen, who acknowledges that the mass exodus by states from consortia raises questions about whether states will choose ownership of content over savings.

“If high-quality and savings were enough, the consortium would still exist,” he said. “We offer states the unprecedented opportunity to share high-quality assessment content while maintaining their independence and the flexibility to design their own tests. That’s a crucial differentiator.”

That argument resonated with officials in Illinois, when they decided several years ago to extricate the state from a testing consortium in order to create a custom test. As one of the nation’s most progressive states, Illinois was moving quickly toward adopting an accountability system heavily weighted toward growth. Growth strategies necessitate longitudinal data, and officials in the state could not afford to risk losing several years of accumulated student data.

In early 2018, Illinois began work on a new assessment that could balance its state-specific set of needs – shorter tests, and a shift toward so-called adaptive tests, assessments in which the difficulty of test questions is adjusted depending on whether a student answered the previous question correctly. The new assessment, the Illinois Assessment of Readiness (IAR), will be powered by content drawn from New Meridian’s expansive pool of test questions. As a result, Illinois will be able to adopt a test that takes less time to administer and less time to grade, while maintaining continuity that is critical to educators in the classroom and the state’s ability to measure growth.

In structuring his assessment services company with maximum flexibility in mind, Mr. VanderVeen took the unusual step of separating – technically and contractually – content development and test design from administration of the test. His company has agreements in place with Pearson and DRC, two of the largest testing administration vendors that allow states to transition smoothly from one administration vendor to another.

While it’s too early to pronounce judgment, there are early signs that Mr. VanderVeen’s efforts appear to be paying off. Nine states are currently utilizing New Meridian test items under licensing agreements.

Bullish on growth, New Meridian insiders say the company is already working on expanding its assessment content beyond math and English, to include science.