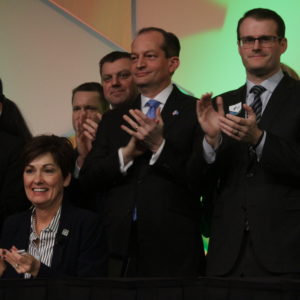 The Future Ready Iowa Summit featured a day’s worth of speeches, breakout sessions, and symposiums about empowering Iowans — whether in grade school or high school graduates — to take advantage of career opportunities in advanced manufacturing and high-skill service careers. There are currently approximately 65,000 such openings, across multiple fields in the state. The event, held in tandem with the signing of the Future Ready Iowa Act, is in keeping with Governor Kim Reynolds’s (R) goal to have 70 percent of the state’s workforce obtaining an education or training beyond high school by the year 2025, specifically with the aim of placing newly educated Iowans into careers of “high-demand” in the state. Currently at approximately 58 percent of Iowas have this education or training. In order to do that though, stakeholders were asked to think about the future of the economy beyond just a bachelor’s degree.

Since the turn of the century, earning a college education beyond an associate’s degree has become nearly a new minimum requirement to compete for jobs in an economy that never used to require them. Jobs from dental technicians and hygienists, architectural drafters, and photographers, to claims adjusters — to name a few — all saw a minimum 35 percent increase from 2007 to 2012 in employers requiring a credential or a degree to consider a candidate, according to Burning Glass, a company that analyzes job postings across all market sizes.

While studies show that attaining a college degree past an associate’s degree is critical in lifetime earnings when compared to just a high school diploma, Gallup Executive Director of Education and Workforce Development Brandon Busteed told stakeholders at the Future Ready Iowa Summit. He said that all the country really has to show for the increase in degree attainment over the last 30 years is a 1.1 GPA increase.

“We are what we measure,” Busteed said. “Are we measuring all the things that we value, because [success and values] are two very different things.”

What Goes into A Standard Degree?
Busteed said that while an increase in GPA by 1.1 points is a great feat for American students, and contributes to the level at which many students graduate, media and researchers have been missing the mark when it comes to the correlation between earning a degree and having a successful career. The way modern rankings for colleges and universities are derived looks at inputs such as high school class rank and standardized test scores, and is computed into college retention rates and degree attainment, not career success. This creates a broken link between educational attainment and work output.

“Based on inputs not outputs, if you wanted to know the best colleges for learning based on when students matriculate, we have no idea who’s doing well in that,” Busteed said, “We’re not measuring growth and development over time.”

According to Gallup’s research, 33 percent of respondents to a survey on the new vision for American education stated it had taken “several months or longer” to find a “good” job after graduating. Approximately 27 percent said they were deferring to graduate school. Gallup defined a “good” job as one that was fulfilling while still earning a sustainable income. Further research showed that out of students between grades nine and 12 in the U.S., only five percent said they had spent time interning with a community organization, and only 17 percent said that they had worked an hour or more at a paid job.

“The number one thing wanted by employers from graduates are students who had a job or internship experience,” Busteed said. “Employers would exchange a ‘B’ student who had an internship for and an “A” student without them. That’s a really important message for all of us in the audience today.”

Gallup’s research showed that a graduate’s chances of being successful in a job beyond graduation doubled when they were required to do semester long projects in their chosen area of study, had supportive and challenging professors and academic departments, and held an internship. According to Gallup’s survey, only five percent of college graduates surveyed felt prepared for their career upon graduation, while 95 percent of graduates did not.

‘Good’ jobs that don’t need a BA
Given the rising costs of attending a four-year university and a lack of consistent structures and experiences in such an environment, as well as the long wait between graduation and actually being hired into a job, Chief Economist of Georgetown University Center on Education and Workforce Nicole Smith said that stakeholders needed to step outside the assumption that “a good job requires a BA.”

According to Smith, if a “good” job is one that pays a modest salary, over her two years of collecting data, there exist 36 million jobs in that nation that require a bachelor’s degree, and 30 million jobs that do not require it. From a pay scale perspective, Smith said that in 2015 she found that the economy had about 8 million jobs that paid between $45,000-$55,000 per year, and 16 million that paid $55,000 and up.

“In looking at these ‘good’ jobs, the narrative that all these jobs have gone away is not complete,” Smith said. “There are many of these jobs that still exist.”

Smith said that while automation has taken many of the manufacturing jobs that used to exist before technological advancements, there still exist jobs in manufacturing that simply require more specific training and mastering of skills. These include careers in nursing and medical technology, as well as jobs in machine working and computer coding. According to her research, 40 years ago, each manufacturing worker contributed about $100,000 towards economic output, in a time when manufacturing was 30 percent of the American economy. Today, each manufacturing employee contributes about $300,000 of economic output. When it comes to Iowa, Smith said that the state ranks fairly high in good jobs that don’t require a degree. Approximately two out of five jobs in the state do not require a Bachelor’s degree.

An Economy Beyond a Bachelor’s Degree
Busteed said that Gallup’s research revealed an an important indicator that is not being taken advantage of in rethinking the importance and relevance of a college education.

“It turns out that when asked where adults [in careers] got advice for college and what to major in,” Busteed said, “the top rated advice comes from the least used source–employers. Grads who got advice from an informal source at an internship of from an employer, that advice was more helpful than any advice source, more than formal counseling sources.”

Busteed said that the country has an opportunity to capitalize on getting opinions and input from community employers, as well as employers throughout the country to help students pick careers, and get experience in those careers early, to really capitalize on the education they receive. While not saying that high school counseling isn’t “working,” Busteed did say that they could do a better job in setting up meetings between students and employers to begin the career choosing process.

Smith echoed Busteed’s sentiments in stating that the country has to have a better “PR campaign” in selling young students and graduates that today’s manufacturing is not manual, repetitive labor, but one that takes skill and creativity.

“What we have is a perfect storm here of increasing difficulty in repayment of student loans and the level of burden felt in society by decisions we make and paying back those loans,” Smith said. “This is an uncomfortable conversation to have but we must have it. The point I’m trying to make here is we need to pay attention to the decisions we make about the jobs you select.”

In addition to the efforts passed in the Future Ready Iowa Act, both speakers said that companies and schools need to have a conversation about the future of certain industries, and the true benefits and costs of getting degrees in programs that students might not actually need in order to live successful, fulfilling lives.