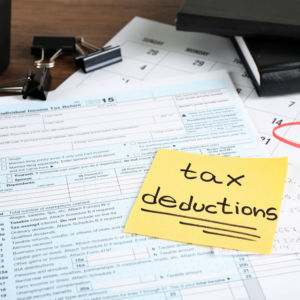 The Iowa Department of Revenue anticipates Iowans’ tax liability to the state will increase with the implementation of the Tax Cuts and Jobs Act. While Iowans’ tax liability to the federal government is anticipated to drop by approximately $1.5 billion, because of the state’s policy of federal deductibility, every time that federal liability decreases, state liability increases, according to Courtney Kay-Decker, director of the Iowa Department of Revenue.

Kay-Decker and the department’s administrator and chief economist Amy Harris presented their data on the law’s impact to Iowa revenue at the Revenue Estimating Conference’s (REC) first meeting of 2018 on January 5. Both Kay-Decker and Harris expressed that the data that the department was using for its predictions was preliminary, and wasn’t representative of the average Iowa taxpayer. In order to extrapolate the impact on the state, the department used a simplified example of households earning $100,000 adjusted gross income. 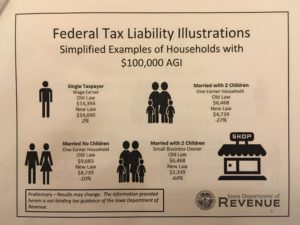 For a single taxpayer under the previous federal tax code, the tax liability to the state would be $4,317. Under the new tax code, he or she would pay $4,290.

For a married couple with no children under the previous tax code, the tax liability to the state would be $4,693. Under the new tax code, they would pay $4,789. 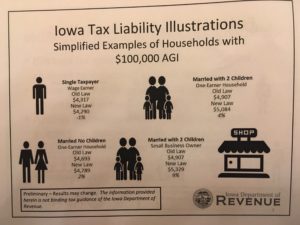 “The federal government incentivized families and small businesses, which ends up being deincentivized with Iowa’s deductibility,” Kay-Decker said.

Because the tax law limits deductions when it comes to personal, sales tax, and property taxes, the department estimates that taxpayers advance-paid approximately $80 million in property taxes in December of 2017 in order to receive the deduction benefit on the same year’s tax returns. Kay-Decker said that the number was an extrapolation from talking to several counties and looking at several data points. From that extrapolation, the department anticipates a decline in fiscal year 2018’s general fund revenue of approximately $4.8 million.

As to other behaviors of taxpayers in response to the law, Kay-Decker said that there isn’t enough information to predict the full impact of the bill, as most of the impact won’t begin to be felt until next fiscal year and in fiscal year 2020.

When it comes to the impact of the corporate tax reform on the state, Kay-Decker said that there was not enough information to predict corporate behaviors to accurately predict the tax liability as of the date of the REC meeting.

Governor Kim Reynolds is scheduled to announce her administration’s plan for tax reform at her Condition of the State Speech on January 9. Reform is a priority for her in 2018, as well as of the Republican-controlled House and Senate, who have advocated for an income tax reduction.