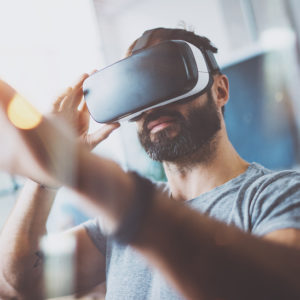 Gens Z, Y Think VR Is the Tech Most Likely to Change How They Work

The youngest generations in and about to enter the workforce think virtual reality will change the way they work more than advances in cloud computing, wearable tech, or audio and video streaming.

According to a survey of 18,000 professionals and students across generations X, Y and Z, the latter two believe VR will take center stage in workplace tech in the years to come.

Those born between the early ’80s and mid-’90s (Gen Y or “millennials”) and between the late ’90s and early 2000s (Gen Z) see VR “as the technology most likely to revolutionize their work in the coming decade, putting it ahead of wearable technology, project management, and audio/video conferencing” data from INSEAD Emerging Markets Institute, Universum, the HEAD Foundation, and MIT Leadership Center suggests.

The high expectations for VR are more present in certain countries like Mexico and Singapore, and less so in countries such as India.

Generation Z “was most enthusiastic about the potential” of VR, a summary from Harvard Business Review (HBR) reads, while a sample of Gen Xers — professionals born after the “baby boomer” generation, generally between the mid-’60s and early ’80s — believe VR “would have a low impact on their work.”

“They had the most enthusiasm for project management tools, with certain countries, such as Germany, Japan, and Russia, also expressing excitement about cloud computing and e-learning tools,” study authors wrote.

The survey comes during a period of flux in retail VR, where video game hardware like the Oculus Rift, HTC Vive, and PlayStation VR headset are way out in front when it comes to bringing the technology to market.

Sony announced Monday it’s lowering the price of its PSVR bundle from $449 to $399 after slower than expected sales, and plans to market the tech toward commercial customers like entertainment facilities in Japan instead of individual consumers. The PSVR came out last October and topped 1 million sales in June, but few and lackluster game titles, not to mention a price point as high as a PlayStation 4 itself, have lent to a decline in demand.

The PlayStation announcement comes a week after HTC announced a $200 price drop for its Vive headset, now $599. A follow-up story from Bloomberg reports HTC is considering an exit from the VR market entirely, possibly selling off its Vive division or the company as a whole. The Taiwanese company has so far reportedly held talks with Google.

Facebook-owned Oculus dropped the price of the Rift headset to $399 in July, “half the price the company was charging for that same hardware package less than five months ago,” according to Ars Technica. At the time Oculus said the price drop was part of a temporary promotion and sale on Rift games, but the price has yet to go back up. That’s the second price drop this year for the Rift, which went from $599 to $499 in March. That’s a significant difference from just one year ago, when a PC-ready Oculus bundle cost around $1,500. The same thing is now available for $1,000 or less.

The survey goes on to ask respondents about technology more generally. A larger portion of “older professionals” in Britain, Sweden, and Norway consider technology generally more of a “hinderance” than other groups. Gen Xers in Denmark, Sweden, and Mexico see it as “helpful” and Gen Y survey respondents in Mexico, Sweden, and Germany considered technology “most favorably” out of all the others.

Conversely the youngest generation surveyed in Germany, Japan, and Mexico also see technology as merely “useful,” while Gen Z students in China, the U.S., and Canada “were more likely to view technology as a hindrance to their work.”

Despite disagreement on the importance or direction of tech, a large majority seemingly agree on their employers’ need to boost their digital capability. More than 70 percent of Gen X and Y professionals think their businesses’ tech capability is important, but only some 40 percent of both generations consider their own companies’ digital prowess “high.”

Similarly high numbers — more than 70 percent across the board — said “flexible working arrangements represent an important opportunity for their work lives in the next 10 years.”

“The Swiss across all generations put flexibility as a top opportunity,” study authors said. “So did Singaporeans in Gen Y and X (Gen Z Singaporeans put flexible working locations first). Chinese and Japanese respondents were excited about the international job opportunities and working with clients and colleagues in other countries.”