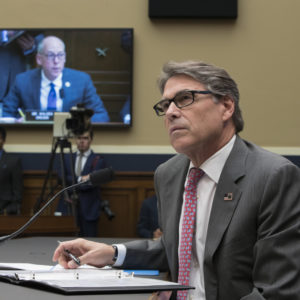 Not all that long ago, avoiding gas shortages, and 1970s style gas lines, was a foreign policy goal for the U.S. Today, the development of fracking technology has made America one of the world’s leading energy suppliers, a position that not only strengthens the American economy, but also impacts our foreign policy, says Energy Secretary Rick Perry.

“America is the leading energy producer in the world, not just in terms of our oil and gas, but dealing with nuclear, carbon capture utilization technology to allow coal to be able to be used in a wise and environmentally friendly way,” Perry said, speaking at the Virginia Energy and National Security Forum in Norfolk, Va.

“The fact of the matter is, the world is still going to be using fossil fuels.”

By 2030, 70 percent of the energy produced will still come from fossil fuels, he said, citing International Energy Agency statistics. What America needs is government policies that recognize these realities and which support both conventional and alternative energy.

Perry made a bold prediction about the future of American energy production, saying that, while market fluctuations mean that it is unlikely that the U.S. would ever stop importing oil altogether, the days of relying on foreign suppliers are numbered.

Perry said that the country has already reached a state of energy dominance and the coming years will show that this is a long-term, not temporary situation.

Looking at potential international competitors, Perry sees more encouraging signs. Governmental unrest and economic collapse have slowed production in Venezuela, and other overseas producers have struggled to keep pace with the low American cost of production. On Monday, new sanctions will go into effect on Iran, a development which Perry says he believed the market has already accommodated, but which nevertheless will help American producers maintain marketshare.

Meanwhile, American production has continued to grow and adapt to changes in oil prices and technology. Over the course of the year, American oil production has already increased by around 1 million barrels per day. The third largest oil field in the world is the Permian basin in West Texas. Meanwhile Appalachia contains not only a 200 year supply of coal, but also portions of the the Marcellus and Utica shale fields. The geographic spread means that many regions of the country would benefit from jobs tied to fossil fuels–even before lower energy prices are factored in.

This puts the U.S. in a strong position on the world stage, says Perry, who stresses that energy is at least in part a national security concern.

“There is not a more powerful national security issue in this country than making sure that American energy is flowing, is being produced, that it’s in those markets. It doesn’t take a Ph.D in political science to understand that decisions that have been made in the last forty years, or for that matter in the last 65 years, were made with energy and the production of that energy and the distribution of that energy at the core,” he said.

The technological advances that opened up the shale fields and revolutionized energy production have dramatically changed that national security calculus. American energy production has put us at a critical moment in geopolitics, one that Perry stresses President Trump properly understands. He notes that, despite the naysayers, Trump’s negotiations have helped to open foreign markets to American energy, including, most recently, Germany.

Ten years ago, the strength of this position was outside of anyone’s wildest dreams. Today, it’s a reality, all thanks to American ingenuity.