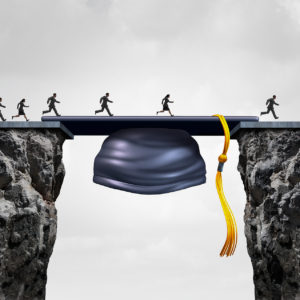 Who Goes to For-Profit College?

Students enrolled in for-profit college programs were disproportionately female, older, and economically disadvantaged as of 2012, according to a government study released last month.

The Institute for Education Sciences, the research arm of the Department of Education, drew data from a nationally representative survey of over 100,000 students enrolled in higher education in 2012 to compile the report.

Sixty-four percent of for-profit students were women, compared to the average 57 percent share of women across all of higher education. Women were particularly well represented in for-profit less-than-two-year programs, where they comprised just over three-quarters of those students.

The average for-profit student also tended to be older, according to the study. About 77 percent of students in for-profit four-year institutions were over the age of 24, while only about 30 percent of students at public or private nonprofit schools were over that age. Correspondingly, for-profit institutions were far more likely to enroll students who were financially independent, and who had families to support while in school.

For-profit institutions also served a more diverse student body. Unlike traditional public or private nonprofit schools, the majority of students enrolled in for-profit schools were of racial or ethnic minorities, according to the study. For-profit schools also enrolled more than twice as many military service-members by percentage of total students. Nine percent of for-profit students were active duty or serving in the Reserves or National Guard.

Because federal Pell Grants are “means tested,” meaning only the students from the lowest-income backgrounds are eligible, the report explained, “the size of the Pell Grant student population is often used as a proxy to characterize the low-income status of student populations.” By this measure, far more students enrolled in for-profit schools are disadvantaged. Sixty-four percent of students in for-profits received Pell Grants, compared to a 41 percent baseline of all higher education students nationally. The data also shows that students in for-profits are more likely to take out loans, and more likely to default on their loans.

Finally, for-profit higher education is far more likely to be geared to Career and Technical Education (CTE). A full 93 percent of for-profit students were in CTE programs, compared to the 69 percent national percentage of students taking those courses. For-profit students were far more likely to major in fields like computer sciences or health care, and less likely to study the humanities. Fifty percent of the more than 700,000 students enrolled in for-profit two-year institutions were preparing for careers in health care.

As a result of the structure of for-profit schools, the students they attracted, and the subjects they focus on, a large percentage of instruction was delivered online or through non-traditional study programs. Over 21 percent of for-profit students reported taking online courses, compared to a national average of six percent.

Because the study pulled data from students enrolled in 2011-2012, the Obama administration’s full effect on the for-profit higher education industry was not captured. Among other relevant regulations, the education department issued a controversial “gainful employment” rule in late 2014 that allowed the department to strip federal aid from institutions in which a disproportionate number of graduates failed to find high-paying jobs to settle their loans.

Nevertheless, the report’s findings are relevant in a new post-election political atmosphere that has allowed for-profits to regain their footing. On Monday, the education department announced it would delay implementation of the gainful employment rule.