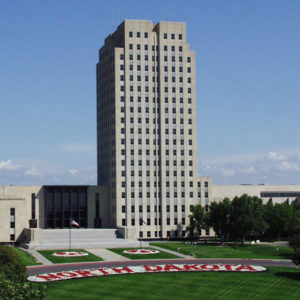 There are few states more red than North Dakota. During the 2016 election, President Donald Trump won the state by more than 35 points and the state’s lone Democratic senator, Heidi Heitkamp, is considered one of the most vulnerable seats up in 2018.While the state’s Democratic Party struggles to organize and field candidates for the upcoming election, a group called North Dakotans for Public Integrity has been receiving positive press for its support of a constitutional amendment to limit the influence of money in politics. The only trouble is, the group itself is not non-partisan, but rather linked to major left-wing donors.

“We’ve worked with North Dakotans from across the political spectrum on this amendment to hold public officials accountable and reduce corruption in government,” said Ellen Chaffee, Democrat co-chair of North Dakotans for Public Integrity in January when the proposed ballot measure was filed. “The political system is broken, so this amendment is needed to ensure that government and politicians put the people of North Dakota first.”

However, when Chaffee and co-founder, Republican Dina Butcher, turned in their initiative to the state Secretary of State, neither could point to any specific examples of corruption. According to Chaffee and Butcher, the proposed amendment was born of dozens of local discussions, a grassroots movement aimed at cleaning up state politics.

The organization of their group, though, tells a different story. Online job postings looking for canvassers are advertised by a group called Advanced Micro Targeting, Inc., a political consulting firm based in Las Vegas.

“Our firm has been hired to do the field operations and public outreach to generate support for that effort. We engage voters, outline the challenges and proposed solutions, and ask them to get involved,” the company explains in its post. “In ND [sic], that movement is taking the form of a citizen initiated constitutional amendment. Our job is to contact voters and ask them to support that initiative.”

Meanwhile, North Dakotans for Public Integrity is affiliated with and funded by Represent.us, a national group pushing for transparency in political donations and lobbying restrictions, as well as the creation of a state ethics commission. According to its filings with the North Dakota Secretary of State’s office, the state group received $15,500, the bulk of its contributions, from Represent.us. In addition, its Facebook page uses graphics developed by Represent.us.

This connection belies the apparent non-partisan focus of the group’s proposed amendment. Despite describing itself as a “national, non-partisan, not-for-profit organization,” Represent.us is tied to the same sort of well-financed outside interests it criticizes elsewhere. It was founded in 2012 by Josh Silver, a campaign manager and activist who has worked on net neutrality and campaign financing issues.

For years, Silver has advocated fighting political corruption through reform initiatives at the state and local level.

“For too long, reformers have advocated small-step, incremental reforms at the federal level, such as ending secret donations. This is a good and popular proposal, but alone will not come close to fixing the problem,” he wrote for HuffPo in 2014.

“It is time to move from defense to offense, and pass a wave of local anti-corruption laws across the nation over the next few years — while simultaneously organizing a 21st century anti-corruption movement made of grassroots conservatives, moderates and progressives,” he continued.

Rather than getting big money out of North Dakota politics, the ballot initiative seems to be sneaking it in. When pressed on the matter by a local reporter, Chaffee acknowledged the connection to Represent.us, but tried to spin North Dakota’s effort as locally generated.

“This effort is driven by North Dakotans for Public Integrity. The North Dakota Anti-Corruption Amendment is the result of nearly a year of weekly meetings of over a dozen concerned North Dakota citizens from across the political spectrum who found common ground,” she wrote.

“The nonpartisan anti-corruption group Represent.Us, which has chapters in Bismarck and Fargo and more than 1,000 members in North Dakota, has committed to helping to fund our effort. The Anti-Corruption Amendment is not going to cost a lot to pass,” she continued.

At this point, the group is raising signatures in hopes of placing the amendment on the ballot in November. If they are successful in gathering 27,000 signatures by July 9, voters will be able to decide on the matter this fall.