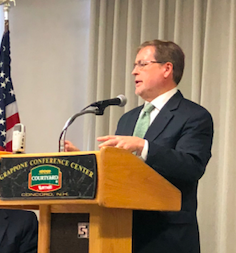 Grover Norquist addresses a group of NH lawmakers and business owners at a panel addressing the Wayfair decision in Concord, NH on October 24, 2018 (credit: NHJournal)
News

At a forum in Concord, NH, Grover Norquist of Americans for Tax Reform warned Granite State lawmakers and business owners that the Wayfair decision isn’t about adding an online sales tax. It’s about taking away New Hampshire’s ability to stop any and all out-of-state taxes at the border.

“New Hampshire has the most to lose because it doesn’t have a personal income tax or sales tax,  And the Supreme Court ruling that you don’t have to have a physical nexus in order to impose a tax allows other states to export their income taxes and sales taxes into New Hampshire,” Norquist told NHJournal. “It’s bad news for all 50 states, but New Hampshire is most at risk and hopefully it will take a leading role in fighting back.”

Norquist was a panelist at a forum organized by former NH Republican Speaker of the House Bill O’Brien, featuring analysis by New Hampshire Attorney General Gordon MacDonald; John Formella, legal counsel to Gov. Chris Sununu; and Andrew Cline, president of the Josiah Bartlett Center for Public Policy. And they all echoed Norquist’s fundamental message: There is far more at stake than just online sales taxes for internet purchases.

At issue is the Supreme Court’s Wayfair decision that overturned 50 years of Supreme Court precedent requiring businesses to have a “physical nexus” in a state before that state could require it to collect sales taxes on its behalf. However, as the panelists repeatedly noted, the ruling does not restrict its new standard to sales taxes alone.

“Wayfair was not about balancing taxes between online and brick-and-mortar businesses. It’s about expanding the reach of high-tax states,”  Cline told the audience. “Massachusetts sent state troopers to our liquor stores to try to collect their sales taxes. Do you really think they won’t use this new ruling to try and collect every state tax?”

Gov. Sununu’s legal counsel, John Formella, recounted the infamous story of Town Fair Tire, and the attempt by the state of Massachusetts to force stores located in New Hampshire to collect Bay State sales taxes on its behalf. “The state of New Hampshire passed legislation to block them, but it was eventually the Massachusetts Supreme Court who stopped this effort.”

Formella urged New Hampshire to pursue a two-pronged approach, “legislation and litigation,” passing laws that will protect state businesses from out-of-state tax-collection requirements and eventually taking “the right case” to court to force the Supreme Court to address the issue again.  “Wayfair raised more questions than it answered,” Formella said.

And this, Norquist argues, is why New Hampshire must act aggressively and quickly to place roadblocks to Wayfair.  High-tax states were already trying extend their taxing authority on residents before the Wayfair decision and they’re going to step up these efforts now that the door has been opened.

“In Ohio, if you leave and go to Florida for example, they check to see if you still contribute to any local charities. If you do, that  will be used to say you really haven’t left and so you still must pay Ohio taxes,” Norquist told the audience. That effort was eventually turned back, but “it shows how vicious and how serious they are about chasing after that money.”

“These high-tax states are like East German border guards. If they think you’re fleeing they’ll shoot you in the back.”

O’Brien expressed his concern that the proposal that died in the New Hampshire House this summer was fundamentally flawed. It was a wall, O’Brien said, “but we need a minefield. We need as many laws as possible so that, if one of these states gets over our wall, they find a minefield of legislation waiting for them.”

One “mine” would be a state law making it illegal for New Hampshire businesses to release information about its customers for the purposes of tax collection.  “If this law applies to all New Hampshire businesses without disadvantaging any one and treating all customers the same, no state could claim we were treating them unfairly, and we could invoke our right under the ‘Full Faith and Credit’ clause of the Constitution for the other 49 states to respect our laws,” O’Brien argued.

While Gov. Sununu bemoaned the fact that the legislature failed to pass his proposal in special session over the summer, his counsel said that the effort wasn’t wasted.  For one thing, it re-focused attention on the need not to put any existing protections for in-state businesses at risk.

For example, the proposal called for other states who wanted to collect taxes from local businesses would have to register, which would then give the state Department of Justice 120 days to review that state’s laws and perhaps find legal grounds to refuse their request. “The intent of the registration requirement was to really be a deterrent, but I think there was another way to look at that and that it could be more of an invitation,” Formella said.

The big takeaway, however, is that the door to out-of-state taxation in the Granite State is wide open and it’s imperative that the state act, and act aggressively.

“At least 32 states are acting to require out-of-state tax collections by vendors,” New Hampshire AG Gordon MacDonald told the audience. “It hasn’t happened yet, but it’s just a matter of time.”