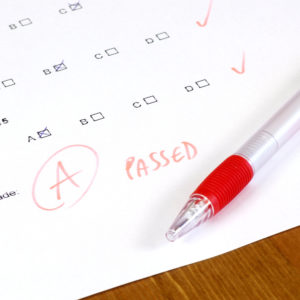 Educators should be using more sophisticated growth or value-added measurements when assessing a school’s quality, rather than simply checking off whether students have reached proficiency, according to a growing number of educational experts.

The proficiency versus growth debate often veers into the technical, and is sufficiently confusing to have tripped up Secretary of Education Betsy DeVos during her confirmation hearing. But understanding the tradeoffs between the approaches to gauging student achievement is important for designing school rating systems that are fair and useful for parents, educators, and policy-makers.

A proficiency-based accountability system might evaluate a school based on how many of its 5th grade students are reading at a 5th grade reading level. The advantage of this system, according to proponents, is that it is easy to calculate success once a benchmark is established—either students score high enough to be deemed proficient or they don’t.

Under a growth system, a school might be rated based on how much progress 5th grade students make over their 4th grade scores during an academic year. The advantage of this system is that it arguably forces schools to focus their resources on all of their students more equitably, and is fairer to schools that service disadvantaged students. On the other hand, growth models tend to be more complex, making student progress more difficult to measure accurately.

David Griffith is a research and policy associate at the center-right Fordham Institute in Washington D.C. Like a growing cadre of experts from both sides of the aisle, Griffith said he is on “team growth” in the debate (Sen. Al Franken, D-Minn., expressed his support for growth over proficiency during his exchange with DeVos).

Under the Bush-era No Child Left Behind Act, growth models were still in their infancy, and all the focus was on achieving 100 percent proficiency rates. Those goals ended up being unachievable, and many considered them to be particularly unfair to schools that serviced a large number of disadvantaged students, who tend to be further from proficiency when they first enter a new school. As experts like Griffith argue, proficiency rates tend to say more about what is happening outside of a school, rather than inside a school.

While the Obama administration began to push states to think more about growth through its competitive Race To The Top grant program, Griffith said that much of the focus in those years was around evaluating teachers via growth measures, rather than entire schools. Because growth measures tend to be more variable year-over-year, pinning high-stakes teacher evaluations on small-sample growth measurements also met pushback.

Or, as Griffith puts it, “Even LeBron James has nights where he only scores 12 points.” For both school accountability and teacher-ratings, he advises policy-makers to design growth measures that average scores out over at least two years to account for statistical aberrations.

With the 2015 update to No Child Left Behind, the Every Student Succeeds Act, or ESSA, states have more flexibility in choosing between growth and proficiency in how they evaluate their schools. Though some states are sticking with the simpler proficiency measures, and some are using a hybrid system, others, like Colorado, have taken a lead in weighing growth scores highly.

Nevertheless, because of the complexity of the growth measurements, Griffith said, “there is a tradeoff between accuracy and transparency.”

Arguably, it is easier for a parent to discern that a school with 90 percent of its students on grade level is “better” than a school with only 50 percent of its students performing on grade level. Hidden in those numbers however, might be the finding that the second school’s students who are below proficiency make more progress than those at the first school, and so would be a better fit for that parent’s struggling child.

One variable that makes drawing out conclusions challenging in both a growth and a proficiency setting is when state boards move the goal-posts by changing the standardized assessments they use to measure achievement—something that has happened frequently in many states in light of the politically treacherous debates that have swirled around the standards movement.