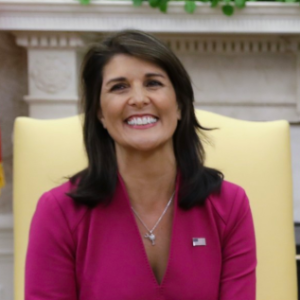 UN Ambassador Nikki Haley announced that she’s resigning from her high-profile, high-pressure job at the end of the year (actually she resigned last Wednesday), and the speculation immediately began: #Haley2020?

“After four years of Donald Trump, America will want a president of sound mind and dignified presidential bearing,” former Sen. Gordon Humphrey told the Washington Examiner just after news broke of Haley’s resignation.  “Ambassador Haley should come to New Hampshire the day she leaves the U. N. I’ll gladly pick her up at the airport.”

Even before the announcement was over, Haley shot down the idea: “For all of you that are going to ask about 2020, no, I am not running for 2020. I can promise you what I’ll be doing is campaigning for this one,” Haley told reporters in the Oval Office. “I look forward to supporting the president in the next election.”

Of course, Sen. Elizabeth Warren was saying something similar not long ago.  But today? She’s running.

At the moment, Trump appears bullet-proof in a GOP primary.  The incumbent president is very popular with his base, has the support of 90 percent of Republicans, and he’s riding the momentum of his victory over the Democrats’ attempt to destroy the Brett Kavanaugh nomination.  “It’s not a good environment for a primary challenge right now,” veteran GOP strategist Pat Griffith told NHJournal.

New Hampshire GOP insider Tom Rath agrees. “The Kavanaugh fight brought over the ‘Intellectual Right,’ if you will–the pundits, the reluctant Trump voters from 2016. They’re on board. So Trump’s at the top right now. But that’s not gonna last,” Rath told NHJournal, “because Trump is still gonna be Trump.”

What happens if the midterms turn out to be the #BlueWave many on the Left have long predicted? What if Trump does something in the next four (long) weeks that tanks GOP turnout or gives Democrats yet another reason to turn out, and the GOP gets what President Obama called a “shellacking?”

Or what if there’s a new scandal out of the RussiaGate investigation, or the NYTimes’ deep dive into Trump’s financial past creates a crisis or….etc. etc. Even Trump fans admit he’s a wildcard president. The world could look very different one year from today–and four months ahead of the first-in-the-nation New Hampshire primary.

“She would be a strong candidate,” Rath said.  “She’s got executive experience, running South Carolina reasonably well. Getting the Confederate Flag down from the state house will make it hard for the media to paint her as some racist right-winger.” Rath watched her campaign up close during the Mitt Romney 2012 campaign. “She was an enthusiastic campaigner,” he says.

Former NH state GOP chair Jennifer Horn goes even farther: “I take Ambassador Haley at her word when she says she is not considering a run for President in 2020. However, if she ran, I believe she would win.”

And back in April, MSNBC commentator and nominal Republican Joe Scarborough said “I think Nikki Haley would beat Donald Trump” in a primary. “I actually think if she ran in 2020 — and this is not me making trouble, it’s really not — I think if she ran in 2020 she would have a very good chance of being the first woman president of the United States.”

Haley’s biggest advantage as a candidate is that she could pull from both sides of the divided GOP. Unlike some other Republicans, she was willing to serve under Trump. That counts with the grass roots. Plus, she’s widely respected by the not-so-Trump/#NeverTrump GOP for her performance at the UN.

A NHJournal poll in August found that 4-in-10 NH Republicans wanted Trump to face a primary challenge. In the wake of recent events, that number has probably come way down.  That fact is a reminder that an event tomorrow could send that number way up–particularly as long as President Trump has access to Twitter.

#NeverNikki?  The one thing everyone should have learned from the 2016 race and everything that’s followed is: Never say “never.”