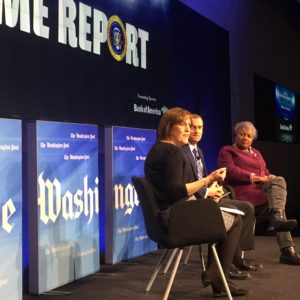 At Trump ‘Halftime’ Report, a Look at the Future of the Democratic Party

Today, Donald Trump is just short of 60 days in office. For political observers closely following the successes and failures of the president’s first 100 days, this is a time to look around and take stock of the new administration’s progress. At a “First 100 Days: Halftime Report” event hosted by the Washington Post on Wednesday, Republican and Democratic speakers from both Congress and the campaign trail spoke about the early days of the Trump administration. Although the discussion frequently returned to Trump himself, the speakers also examined the future of the Democratic Party and how to rebuild it.

By the end of Barack Obama’s second term in the White House, the Democratic Party had been decimated in local elections. In eight years, Democrats lost 1,042 seats in state legislatures, governorships, and Congressional races. This means that they have few local politicians with experience to call upon for national races.

“The future of the party is outside of Washington for now,” she said. Instead, it rests with governors, mayors of large cities, and other local-level officials.

“We know that Barack Obama was a great president. We know that Joe Biden was the voice of working people…but this is a party that needs to develop its wings,” she said. “And that can only come if the party goes back to being a strong visible party at the local level.”

Her interpretation of the situation was echoed by West Virginia Senator Joe Manchin. Manchin, a moderate Democrat, expressed his willingness to work with the new Trump administration. Under the Obama administration, harsh EPA regulations hurt West Virginia’s economy by curtailing coal mining. Manchin hopes that with Scott Pruitt in charge at the EPA, the regulatory burden will be lighter.

“We didn’t get any traction, any consideration, any empathy from the Obama administration,” Manchin said, likening West Virginia’s coal miners to veterans coming back from Vietnam, who “did their duty for their country and got no support when they returned.” For Manchin, Trump’s success in West Virginia exposed the weaknesses in the party’s recent tack left. Embracing identity politics isolated many voters in West Virginia, he argued.

“You’ve become so politically correct that West Virginia can’t even breathe,” he said, describing how Obama-era regulations hampered economic development. “The working person always thought that the Democratic Party would help them. In the last two election cycles, people in West Virginia believed that the Democratic Party would prevent them from working.”

Now that the campaign is over, though, Democrats realize that the political game is shifting. Rather than campaigning for votes, Trump and Republicans in Congress will have to provide visible results or risk losing popular support. This allows Democrats an opportunity to potentially influence Trump’s thinking with their own proposals.

Corey Lewandowski, who worked as Trump’s campaign manager for a portion of the campaign, suggested that Trump would be open to proposals and advice from many different sources. Calling the president “very magnanimous in private,” Lewandowski said that Trump believed in asking people at all levels–from bellboys to staffers–for their opinions on certain issues. This means that Democrats may have a chance to shift policy proposals through what he called a “surround sound advocacy approach” that took issues into the public sphere.

How well this approach could work remains to be seen. In their own ways, each speaker acknowledged that while Trump has so far initiated a broadly Republican agenda, his demeanor is unlike that of recent presidents. According to Sen. David Perdue, the problem here lies with Washington observers, not with Trump.

“This town is having a hard time figuring out what to make of Donald Trump because they are looking at his presidency through the lens of the establishment,” said Perdue. Instead of trying to make Trump fit into the “mold of past president,” Perdue instead urged the audience to consider Trump’s actions through what he called “the bubble lens,” a reference to the Washington-New York City bubble that many Trump supporters see.

Instead of operating in the frame work of business like usual, Trump is ready to “break some eggs,” to achieve his objectives, Perdue said.

“He’s not a choirboy, but neither were a lot of other people in our nation’s history,” he concluded.

After less than 60 days in office, Trump already has Democrats scrambling to determine the best way out of the wilderness. Although Brazile joked that they were “just going fishing,” the way forward appears difficult. As the speakers acknowledged, the party has few opportunities to present its own legislative agenda. Instead, it must pick its opposition wisely, while working on a long-term plan to develop new talent at the local level.