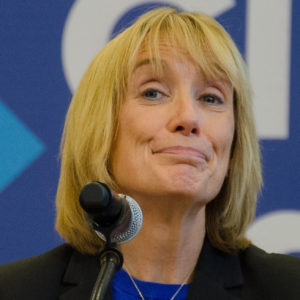 Posted to Politics November 16, 2020 by Michael Graham
During her 2016 U.S. Senate campaign, Maggie Hassan made an appeal to students at the University of New Hampshire:
“Do you want to see a future without student debt? Then vote.”

Hassan made student loan debt a key part of her successful campaign to unseat Republican Kelly Ayotte — a smart strategy in the state with the highest percentage of college students. New Hampshire also ranks third in student loan debt — an average of $36,778 per student.

But as Joe Biden pledges to make student loan debt forgiveness a top priority when he’s sworn in as president, Hassan is silent on the proposal. Indeed, she’s declined to co-sponsor any of the major student debt forgiveness bills filed by fellow Senate Democrats like Chuck Schumer or Elizabeth Warren.

On Monday, Biden was asked if he supported student debt forgiveness and if he would use an executive order to achieve it. While Biden declined to answer the executive action question, he endorsed legislation passed by the House earlier in the year that calls for the immediate forgiveness of $10,000 of student loans.

“They’re having to make choices between paying their student loans and paying their rent…It should be done immediately,” Biden said of loan forgiveness.

However, neither Hassan nor her New Hampshire colleague Sen. Jeanne Shaheen have endorsed Biden’s plan, which would cost taxpayers about $370 billion, according to analysis from The Foundation for Research on Equal Opportunity (FREOPP).

Both senators declined to comment on the Biden plan, perhaps a sign they’re worried about potential backlash from supporting a multi-billion-dollar giveaway program that disproportionately benefits upper-income Americans. Hassan in particular faces the challenge of seeking re-election in 2022, the first midterm of the Biden presidency. The party in power traditionally loses congressional seats during that midterm.

Taking money from blue-collar taxpayers to pay off student loans for kids at Dartmouth and Harvard may not be a political winner.

“If President-elect Biden is ready to spend that much money, student loan forgiveness isn’t a great use of it,” FREOPP’s Preston Cooper told NHJournal. “Student debt is concentrated among high-income households because people with expensive degrees tend to be richer. Meanwhile, people with only a high school degree – who have been hit hardest by the COVID-19 recession – will hardly get anything out of the plan.

“Federal funds would be much better spent on targeted cash relief for the people who need it most, not the people who happened to attend the most expensive colleges,” Cooper said.

Robert Kelchen, who studies higher education at Seton Hall University, agrees. The approach that Biden, Schumer and Warren are promoting would move “resources from older Americans and people who never went to college or paid off their debt to students who still have debt,” he told USA Today.

New Hampshire is a prime example. Yes, it has a high average college debt, but it also has the eighth-highest household income in the U.S.

Some argue the student loan debt issue is overblown. Around 30 percent of undergrads graduate with no debt, and another 25 percent have less than $20,000 worth. Just six percent of student loan borrowers owe more than $100,000 — and that six percent holds nearly one-third of all college debt.

Many Americans object to debt forgiveness because it rewards people who borrowed more than they could afford while doing nothing for families who saved for college or made tough economic choices about higher education.

Progressives, on the other hand, wholeheartedly embrace debt forgiveness, backing comprehensive plans that would wipe out most of the $1.55 trillion in federal student debt held by about 42 million Americans. Younger progressives in particular back this policy, and they played a key role in Hassan’s 2016 victory. During that campaign, she repeatedly pledged to “work toward the goal of debt-free public college for all.”

Now that Joe Biden is making debt forgiveness a priority, will Sen. Hassan finally follow up on her 2016 campaign pledges? And if she does, how will taxpayers with no college debt feel about it in 2022?