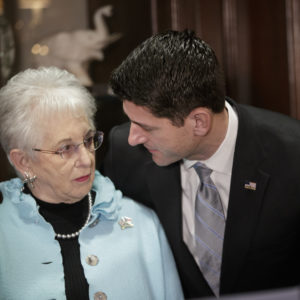 House Speaker Paul Ryan of Wis. confers with Rep. Virginia Foxx, R-N.C., chair of the House Committee on Education and the Workforce, during a news conference on Capitol Hill in Washington, Tuesday, Feb. 7, 2017, following a GOP strategy session at the Republican National Committee offices. (AP Photo/J. Scott Applewhite)
[IS] Opinions

A bill from the U.S. House education committee is a good start on tackling student loan debt, say supporters, but the legislation still faces hurdles in getting to the House Floor for a vote.

An aide familiar with the legislation said that it won’t be scheduled for a vote until the Education and the Workforce Committee takes another crack at it.

The PROSPER Act – Promoting Real Opportunity, Success, and Prosperity through Education Reform Act – is a massive reauthorization of the 1965 Higher Education Act. Critics have raised a number of issues about the bill and claimed that the way it overhauls federal student loans will limit access to college for lower-income students. The bill’s few champions, however, say that it is a good start on stopping the cycle of student loan debt that now totals $1.5 trillion.

“The issue is that the federal government has made it misleadingly easy to access more debt than is really manageable,” said Rachelle Peterson, a spokeswoman for the National Association of Scholars. “That’s how we’ve ended up with so many students who are mired in debt they can’t pay off. The PROSPER Act provides an upper limit that enables students to borrow the amount they need. That reduces the incentives for colleges to raise tuition. This is intended to make college more affordable.”

A number of organizations from veterans’ groups to higher education institutions to even the U.S. Department of Defense have criticized the bill, though, saying it will open up students to predatory loan tactics.

A January information paper from the Defense Department encouraged lawmakers to oppose the bill because it seeks it eliminate the Public Service Loan Forgiveness program. Created in 2007 under President George W. Bush, the program is meant to encourage students to enter careers in either government or the nonprofit sector. The criteria was loose: students must have loans from the William D. Ford Student Loan class, must work in public service for 10 years, and must make continuous payments on their loans for 10 years.

Just 7,500 people applied for loan forgiveness last year – the first year of eligibility – but fewer than 1,000 will actually qualify, according to the U.S. Department of Education. The Defense Department, though, said the forgiveness program is a valuable recruiting tool.

“[T]he (program) offers a financially viable alternative to employment in the private sector, in many cases making service in the Armed Forces an attractive career option for many young Americans who might not otherwise be able to consider the option amidst the steadily increasing costs of higher education,” the department wrote. The memo cited specialty fields such as the Judge Advocate General Corps and others for which graduate degrees are required.

It’s not just the potential of losing loan forgiveness that has veterans’ groups concerned, though.

The sweeping legislation also looks at reforming accountability measures that are aimed at for-profit colleges. The “gainful employment” rule requires that career technical education programs meet a minimum threshold for debt-to-income ratio for graduates. The 90-10 rule requires for-profit schools to find 10 percent of their revenue from sources other than the federal government. The PROSPER Act would eliminate both regulations and leave in place just one accountability measure governing Title IV loans, which will put a target on military students, according to Tanya Ang, policy director for Veterans Education Success.

“Schools are going to want to go after military students who aren’t using those specific programs,” Ang said, referencing the GI Bill benefits that many veterans use to pursue higher education after they leave the service. “That sets up military students for predatory practices.”

“Our higher education system desperately needs market discipline,” Bearse said. “The federal government artificially boosted demand for student loans when it intervened in the market in 2010 and later further enabled student borrowers to repay less than the full balance of their loans.”

A Congressional Budget Office Report stated that there will be 17 million new student loans in fiscal year 2018 amounting to roughly $100 million. For the 2018-19 academic year, the federal government will provide 7.5 million students with Pell grants in the amount of $3,900 per student at a cost of $29.3 billion, according to the report.