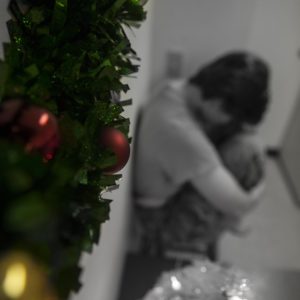 Holidays Are an Especially Hard Time for Those Who Hurt

The holiday season leaves me wondering what I can say to a particular group of people for whom the holidays may be a double-edged sword. While they enjoy the delights of the universal celebrating, they’re separated from it by disease.

I’m thinking about those who suffer from one terrible affliction, Myalgic Encephalomyelitis, also known as Chronic Fatigue Syndrome, and often referred to as ME/CFS, but these thoughts apply to many.

For more than a decade, I’ve tried to find a way of describing this disease, which afflicts people for life. It’s an insidious disease. I’ve seen many ME/CFS patients who appear to be well, even in good health. And I’ve seen those who are totally bedridden, and must sleep in a quiet, darkened room because they’re overly sensitive to sound and light.

All patients’ lives are suspended by ME/CFS: They’re there but not there, enjoying small, occasional bursts of normality. These bursts are cruel because the sufferers will be overwhelmed by pain and overwhelming fatigue soon enough; aching joints, headaches, mental fog and total exhaustion.

If you’re a patient enjoying a period of mobility, you’re grateful — even though it’s a cruel reminder of what you’ve lost: Normal life, its dreams, its joys and its rewards, aren’t for you. They’re on the other side of an invisible wall from which the healthy life can be seen but is out of reach. In sight, and out of reach, for the rest of the patient’s life. Tantalus revisited.

There are no known cures, and no biological markers to detect the disease. It’s often misdiagnosed as psychosomatic, or worse, families and others tell the suffering they’re not sick but malingering. Family members, friends, lovers drift away, unable to bear the burden of caring any longer. Few patients can work, and poverty is an additional degradation.

The central known and immutable truth about ME/CFS is severe exercise intolerance. If you’re a patient and you exercise, you’ll collapse. A short walk can cause a patient to collapse for two or three days. So patients weigh their options this way: Do I go to a holiday party and pay the price? Or do I forgo the fun for fear of the aftermath?

The disease — at least what I’ve seen from reporting on it — undulates for many patients: Periods of some mobility and long periods, sometimes years, of being invalided.

In trying to write about ME/CFS, I’ve struggled for words that describe this life of being here and not here; of having and not having and of suffering in plain sight, while being far removed from normal living.

Patients suffer a loneliness that defies understanding. Those who live alone endure a kind of solitary confinement.

Particularly, I’ve been affected by the plight of the young who’ll never know the joy of dating, the pleasure of a first job, and the human entitlement of love and the lifetime companionship of another person.

ME/CFS doesn’t kill you in the way other chronic diseases do, but it’s a life sentence without parole, reprieve or, at this point, hope of imminent cure. Suicides aren’t unknown, and I’ve received many letters written by patients who beg for death.

As yet, there’s no cure and no general therapy. Specialists, who are rare, treat symptom after symptom to provide as much comfort as possible. What’s known is that it’s a disease that suppresses the immune system.

This leads me to the holidays and the dichotomy that is always present: Those who suffer loneliness, or pain, or despair suffer these afflictions more acutely while everyone else is cocooned in joy.

They may well cry out: Why me? Why me? Reasonably, they may wonder if they are — to steal a phrase — the children of a lesser god.

There’s no answer. But if those who hurt know that we know and care, you and I, it helps a little, especially in the holiday season