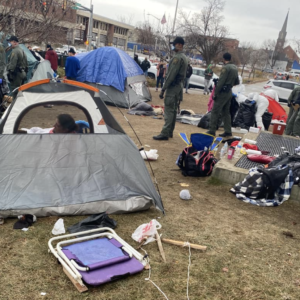 On Friday, state authorities moved in to clear a homeless encampment at the Hillsborough County North Courthouse in Manchester, sparking protests from progressive activists and claims the Sununu administration’s actions are illegal.

A day earlier, Gov. Chris Sununu bemoaned the lack of cooperation from the City of Manchester and the activists who, he said, have been discouraging the homeless from accepting state help.

“The City of Manchester has offered absolutely no assistance in this whatsoever, and they’ve been very brazen and very vocal about that. They don’t want to help, that’s fine. The state is there and we’ll pick up the pieces,” Sununu added.

“Every day, the City of Manchester is working with our community service providers to identify additional shelter beds and provide service options for those living outside,” Mayor Craig’s chief of staff Lauren Smith told NHJournal. “The claim that the City has offered ‘no assistance whatsoever’ is a complete falsehood.”

Wherever the underlying facts, the political reality is that encampment is Craig’s problem, and she knows it. The property may belong to the state, but the scene of dozens of people sleeping under tarps in the heart of her city adds to the perception of misgovernment. Safe streets and public order were the centerpiece of her challenger Republican Victoria Sullivan’s campaign in last year’s mayoral race. (Craig handily won re-election in the heavily-Democratic city.)

These issues are also energizing efforts to get Executive Councilor Ted Gatsas to run for the office again. Observers of Manchester politics believe the Republican former mayor would win in a landslide.

At the same time, Craig has repeatedly said she doesn’t want the campers removed from the state property involuntarily. Why not? Because she fears they will simply migrate to city property and add to her own administration’s struggle with homelessness? Or is it because she can’t support a law enforcement crackdown at a time when the progressive wing of her party is embracing #DefundThePolice-style politics? 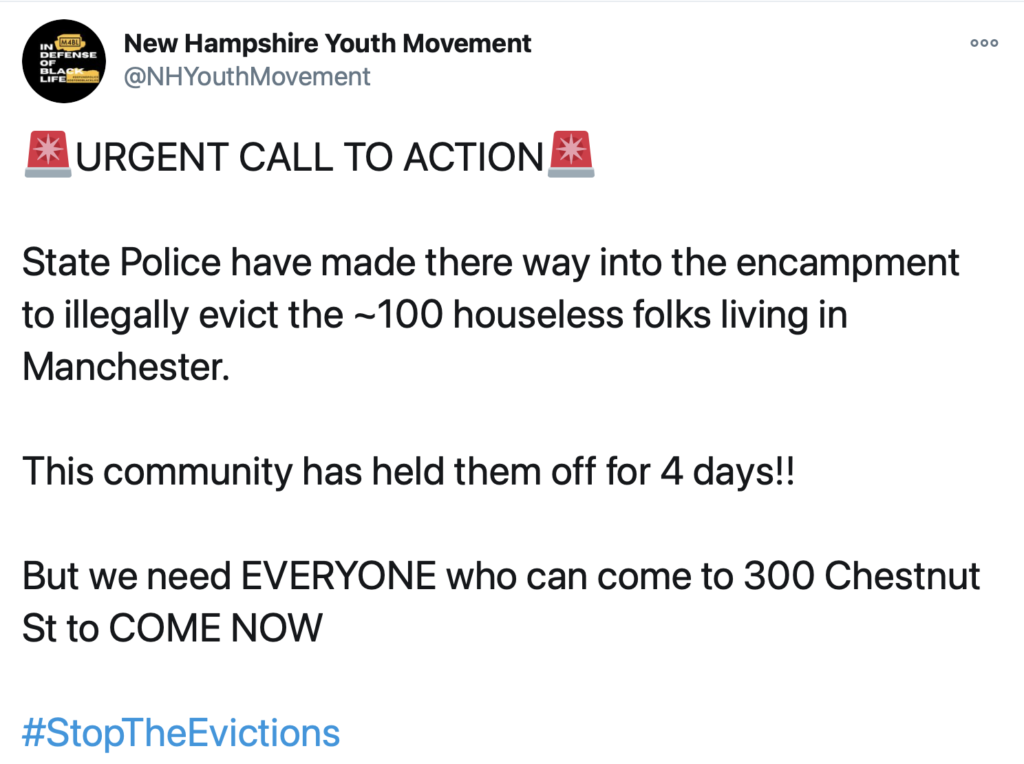 Unlike the other homeless gatherings on city property in Manchester, progressives have made the courthouse encampment a cause celebre. When the state-issued deadline came for the illegal campers to leave, more than 100 progressive activists rallied to an “Urgent Call to Action” to block state officials from clearing the area. And, according to reports from the state Department of Health and Human Services (DHHS), some activists directly interfered with efforts to get the homeless to accept state help.

“Unfortunately, you also have a few protesters that are there who have told individuals not to take the services being offered,” Sununu said Thursday. “I have to tell you, I can’t tell you how dangerous and frustrating that is. These individuals are out there — it was 15 degrees last night. Encouraging anyone to stay homeless when it’s 15 degrees, when you’ve been offered a warm bed and shelter makes no sense, and it is dangerous,” Sununu added.

DHHS issued a joint statement with the state Department of Justice declaring, “interfering with this process is unacceptable behavior.”

“Today our governor LIED to everyone in a press conference saying that ‘protestors’ have been telling houseless folks not to take beds offered to them,” said Josie Pinto, political director for New Hampshire Youth Movement. “Today was the first time many of them got that offer, and we were there to help everyone get what they needed.”

Whatever happens at the courthouse, New Hampshire progressives have made it clear they have a far bigger agenda than a few square blocks of downtown Manchester. The group MAD NH — Mutual Aid and Defense — a “direct action” organization, has been aggressively fighting efforts to close down the encampment, with the support of fellow progressives at RAD (Rights and Democracy) NH, Black Lives Matter and others. MAD has issued a list of demands on behalf of the “residents of the houseless camp,” among them the right to camp out, live and sleep anywhere they choose and to reject mental health services (“autonomy over health and housing.”)

The fundamental premise these progressive groups share is that the homeless people who’ve taken over public property are entitled to do so. They reject the right of citizens who’ve elected city and state governments to maintain order and protect their communities reclaim public property on behalf of the public.

The homeless issue is a difficult one, which is why both Mayor Craig and Governor Sununu are struggling to find a solution. But the politics are pretty straightforward: Telling taxpayers they have to let people sleep on their sidewalks and live in their parks and that there’s nothing they can do about it? That’s a political loser.