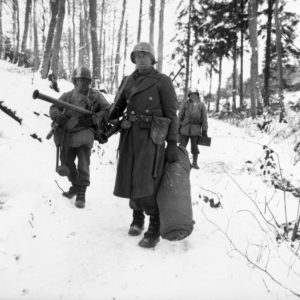 Honoring Those Who Fought in the Battle of the Bulge

This Monday, December 16, will mark the 75th anniversary of the Battle of the Bulge, the largest and bloodiest single battle fought by the United States in World War II. More than 1 million Allied service members took part in the campaign and more than 22,000 Allies and civilians were killed and an additional 75,000 wounded, missing or captured, making the Battle of the Bulge one of the costliest battles the U.S. Army fought.

While D-Day, Victory in Europe Day, and other milestones of World War II receive the rightful attention and designation of commemoration on the calendar, it’s also important to reflect back at just how important the Battle of the Bulge was at turning the tide in the fight against the German army.

On December 16, 1944, German forces launched an ambitious counterattack against Allied positions in the Ardennes Forest. Their goal was to thwart the Allied advance into Germany. Instead, in this decisive six-week campaign that became known as the Battle of the Bulge, American forces resisted and overcame the German assault, delivering a huge blow to German military capabilities and paving the way for the final push into Germany.

As the German advance continued, American troops in the Ardennes, many of whom were refitting after rough action months before, delayed and resisted the offensive with resolute fervor. One of the most crucial sites of American defense took place in Bastogne, a small crossroads town that was essential to supplying German forces pushing toward the Meuse. By December 21, the rapid German advance westward had encircled the town, which was defended by the 101st Airborne Division, along with troops from nearby battered units. Despite being outnumbered, low on food, medicine and other supplies, and lacking proper cold-weather gear, the Bastogne defenders dug in for a tough fight.

On December 22, the Germans offered Brig. Gen. Anthony McAuliffe, the commander of the 101st in Bastogne, the chance to surrender to avoid annihilation. McAuliffe famously responded, “Nuts!” signaling the paratroopers’ resolve to hold their positions no matter the costs. In response, German forces pounded all sides of the besieged city for days, yet each assault failed to break the American positions.

After the 101st spent a frigid Christmas in their foxholes, Patton’s Third Army broke through the German lines to rescue the 101st in Bastogne. Like a belated Christmas present to McAuliffe, the siege of Bastogne was broken. The Third Army’s reinforcements had punctured the bulge and stymied German momentum.

With the tide of the battle turned, American forces could begin to restore lost ground. The 2nd Armored Division halted German tanks headed toward the Meuse, effectively halting Germany’s push westward. With weather improving, reinforcements arriving, and American air support returning, American troops began to retake small towns like Foy, while the British helped reduce the bulge from the north. Their positions breaking, German forces began to withdraw by mid-month. By the end of January, the Allies had retaken all territory lost in the Ardennes campaign, finally hammering out the bulge.

The failed campaign by the Germans burned through vast quantities of men, equipment and gasoline that they could not replace, decimating any hopes that Germany could hamper Allied victory.

The Battle of the Bulge is remembered today as a testimony to the fighting spirit and determination of American soldiers. Their sacrifice, valor and dedication ensured the Allies’ final push into Germany and eventually victory in Europe.

Today, we honor and preserve the memory of ALL Americans who participated in the Battle of the Bulge and helped bring freedom to millions around the globe.