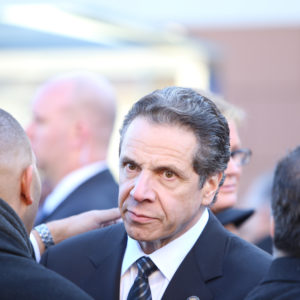 A weekend trip to New York got more expensive on Friday after Democratic Gov. Andrew Cuomo signed a law targeting Airbnb and threatening to boot the startup from one of its most popular and successful markets. Under the new law, people advertising rentals of less than 30 days can be fined up to $7,500 if it is found that the host is not on the premises during the rental.

New York City is a major market for Airbnb, containing about 45,000 of its 2.5 million worldwide listings. The company filed a lawsuit of its own seeking to stop the law from taking effect.

Supporters of the law allege that Airbnb hosts are turning empty apartments into de facto hotels, taking units off of the market and helping to drive up rental prices in a city which already struggles with notoriously high real estate prices. They point out that while average rent in NYC increased 32 percent from 2002 to 2014, the top Brooklyn Airbnb neighborhoods saw increases of closer to 45 percent.

Airbnb has made numerous attempts to assuage the city’s worries. Its first report, in 2013, presented the results of an economic study showing that Airbnb guests had generated $632 million in economic activity in New York during the previous year. And this August, the company released data showing that it had removed some 2,570 illegal listings in a little more than a year, including 337 in the month of June. Its report said that “Airbnb listings represent a fraction of the housing stock in New York City.”

The company argues that even if the supposedly illegal listings were vacant “they would represent only 1.1 percent of all vacant units and 0.1 percent of all housing units in New York City.”

Already Airbnb’s website advises potential hosts to contact the city’s departments of buildings or finance or other city agencies directly with questions they might have about local laws. The site also lists various regulations including professional licensing, zoning, and taxes which apply to Airbnb hosts. The list also spells out the restrictions of the New York State multiple dwelling law, which critics allege the company routinely violates.

While Airbnb argues that listings help renters to stay in their own neighborhoods, affordable housing advocates produce reports arguing that 55 percent of listings allow for the booking of an entire home, rather than just a room. The trouble seems to be finding data that can be trusted. For example, critics of the company repeatedly turn to one of two studies.

The first is from Inside Airbnb, a website run by Murray Cox, an Australian programmer and photojournalist now living in NYC whose work primarily focuses on “food justice” and Venezuela. His site pulls data from Airbnb’s website and performs various analytics to show how “Airbnb affects the city’s housing supply and affordability” not only in New York, but in cities around the world.

Cox’s data is the foundation for “Short Changing New York City,” a report for Housing Conservation Coordinators. It is has also been referenced in several news stories as an independent, third-party source of information about the site. However, Cox is not a neutral observer of the company. Instead, he supports critics of the company who claim that it drives up rent.

The second source of data is a study commissioned by Skift, a self-defined “industry intelligence platform,” that provides research on global travel trends. Skift hired data-extraction company Connotate to examine 19,522 New York City listings on Airbnb’s site. Their study affirmed Airbnb’s claim that the majority of users rent where they live. Around 88 percent of users had only one listing. And the bulk of the available inventory of rooms, some 70 percent, are held by users with one listing.

While Skift acknowledges that “there are a number of hosts engaging in this behavior, Connotate’s research didn’t reveal this to be a widespread problem.”

The apartments that are listed in violation of the law are popular with renters, however. Skift found that the “entire home/apartment” listings were more likely to have user reviews, a sign that they were more often booked and enjoyed. The report also highlighted 10 people renting more than 300 rooms in the city. The study admitted that Airbnb was one of several sites the owners used to rent the apartments and Airbnb later removed 8 of the 10 prior to a legal hearing.

Since the study was released, Airbnb has increased its efforts to remove illegal multiple listings from its site. The company routinely releases statistics in support of its one host, one home policy, which promotes sharing in primary residences only.

In fact, rather than a broad revolt against Airbnb, the push to restrict homesharing shows pressure from unions and the hotel industry. The New York Hotel and Motel Trade Council, a branch of the AFL-CIO, is a strong supporter both of Gov. Cuomo and Democratic Assembly members. The union’s website lists both a group called Cuomo 2018 and the New York State Democratic Assembly Campaign Committee in its top five campaign contribution recipients.

Additionally, reporting on the controversy reveals the same names popping up again and again. Tom Cayler has been quoted by the Wall Street Journal, USA Today, a local NBC affiliate, the New York Post, and the New York World complaining about noisy parties supposedly hosted by Airbnb tenants for over three years. While some of the stories identify him as a member of the West Side Neighborhood Alliance, not all specify that he specifically chairs the alliance’s “Illegal Hotel Committee.”

At least temporarily, Cayler and his allies have handed Airbnb a setback. However, even supporters of the new law admit that it does not prevent anyone from renting out a spare room, and so, Airbnb remains.