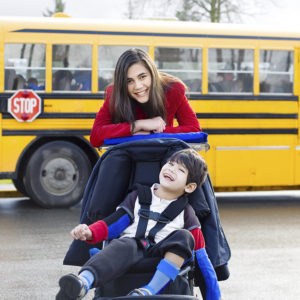 Back-to-school season is always a stressful time for families. That’s especially true this year because many students aren’t going back at all.

Due to COVID-19, classrooms around the country are closed, burdening working families and hurting students, especially those with disabilities.

That’s because the risks of reopening are rare, yet the consequences of closures are grave. Fewer children have died this year from COVID-19 than from the flu (and it’s been a mild flu season). The CDC estimates that children have just a one in a million chance of dying of this disease.

When kids do contract COVID-19, they tend not to get severe cases. “The preponderance of evidence,” writes the AAP, “indicates that children and adolescents are less likely to be symptomatic and less likely to have severe disease resulting from SARS-CoV-2 infection.”

Child transmission, according to emerging scientific data, is also relatively rare. School reopenings in the rest of the world, including in Europe this spring, haven’t caused disease outbreaks. Neither have daycares in the United States. A study in the Journal of the American Medical Association indicates that children produce less of an enzyme necessary for the virus to bond. Some scientists believe children act as “a brake” on infections.

Meanwhile, the pedagogical, psychological and physiological side effects of closed classrooms are well-documented. According to a study by McKinsey, Hispanic, Black and low-income students will respectively lose 9.2, 10.3 and 12.4 months of learning if in-person schooling doesn’t resume until January 2021. For many children, schools are the only place to get a nutritious meal and exercise; nearly half of students nationwide rely on school for free or reduced-price school lunches.

Children with special needs are perhaps the biggest victims of school closures. Virtual learning is hard for all kids (and parents), but especially for those with disabilities. According to a Pew Research study, this population has a far lower comfort level with technology.

There are nearly 7 million disabled students in the country, one-sixth of national public school enrollment. ADHD, autism and learning disabilities are the most common conditions, which are ameliorated by consistent and attentive in-person instruction, including personalized behavioral therapies. Many special needs children also receive afternoon in-school training sessions. Such services for this vulnerable population have largely ended along with classroom learning.

Specialized school therapies can be hard to implement at home.

Schools also offer outlets for the extra energy that those with ADHD and autism often have. Parents, trying to balance work amid playground closures, usually can’t compensate.

According to Jackie Baker, an autism therapist in New York City, it could take at least a year to remedy maladaptive behaviors that disabled children have picked up due to extended breaks from school. Routines and consistency are particularly necessary for special education students because they can struggle with organization and time management.

Parents, especially mothers, who do the bulk of the childcare, are also affected. Balancing work and parenting has always been hard. Now classroom closures are forcing some mothers to choose between their careers and their kids. This dilemma has economic implications, slowing the national recovery from this pandemic.

Kids shouldn’t be another casualty of COVID-19. Yet by refuting science and refusing to reopen classrooms, school districts across the country are turning their backs on students, particularly the most vulnerable.