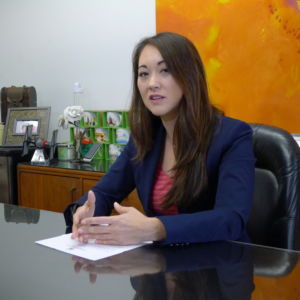 How Did Beth Fukumoto, Hawaii’s GOP Minority Leader, End Up Running In a Democratic Primary?

In a year when political analysts are focused on the unprecedented number of women running for office, nearly 80 percent of whom are Democrats, one candidate in Hawaii emphatically highlights the deep-rooted worry of Republican strategists over the polling trends among women and millennials in the age of Trump.

Had things turned out differently, Beth Fukumoto could have been one of the rising stars who pundits describe as “the future” of the Republican Party. The Japanese-American woman won election to the Hawaii state legislature in a deeply blue state and quickly rose to the rank of minority leader. Now, just a few short years later, at age 35, she is running for the Democratic nomination for Hawaii’s First District.

The primary race is predicted to be the real fight for the seat. Five Democrats, including Fukumoto, are running for the nomination, but so far no Republicans have entered the race. Fukumoto says that this gives people a chance to decide “what kind of Democrat” they want.

“When I was a Republican, my label was that I was a progressive Republican. I think I would call myself a progressive. I’m progressive on a number of issues already and I would go with that label,” she told InsideSources, saying she hoped people would see her as someone “progressive, but reasonable.”

Self-identifying as a “progressive” is surprising coming from a woman who until recently was one of the main faces of the Republican Party in Hawaii. The details of her story reiterate a growing theme: that pragmatic concerns about housing and infrastructure are not being heard by either party. For Fukumoto, the original decision to run as a Republican in Hawaii came from frustration with the solidly blue state legislature.

“It felt like alternative voices were not being heard,” she said, admitting that she even heard Democrats say that the state would benefit from more Republicans in the state legislature. Fukumoto ran for state office the first time in 2010, and lost, before winning a seat in 2012.

Her main focus was, and remains, practical issues like housing and infrastructure. As an island state, Hawaii has unique challenges trying to balance the need for housing with the preservation of agricultural land and other natural resources. The state also frequently leaves behind federal highways, she says, leaving other parts of its infrastructure underfunded.

Republicans are a very small minority in the Hawaii state legislature. There are no Republican state senators and fewer than 10 Republican state representatives. As the minority leader from 2014 to March 2017, Fukumoto helped to provide alternative views and served as a fresh face for a party that was aging. Over time, however, she says she began to feel that she was sitting on the wrong side of the room.

Interestingly enough, the election of Donald Trump was not the primary cause of her decision to switch parties. While she readily admits to being horrified by some of Trump’s statements on race, she considers his candidacy more of a “breaking point,” than a sudden catalyst.

“On most issues, I was actually leaning to the left,” she said of her transition. Even during her time as minority leader in the Hawaii state legislature, her Democratic colleagues had wondered why she was a member of the GOP in the first place.

Republicans in the legislature voted to remove her as minority leader in February 2017 and she officially resigned from the party in March.

Although Fukumoto was welcomed across the aisle by her colleagues in the legislature, formally changing her party affiliation was more complicated. At the state level, parties can set their own rules about how people can go about switching their membership. In Hawaii, this process requires initial approval at the county level, where she had to answer questions about both the party’s platform and her own past voting record and statements.

After weeks of meetings, the Democratic Party of Hawaii’s Oahu County Committee voted unanimously to accept her application last June.

She is now running in a competitive Democratic primary, hoping to continue to advocate for the people of Hawaii at the national level. Hawaii’s First District is the only majority Asian district in Congress, and includes Honolulu and the surrounding area. For Fukumoto, the district has special significance since it is where she grew up.

The primary election is set for August 11.