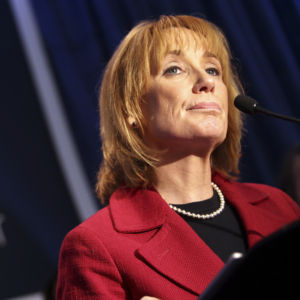 This is something that Democrats locked in tight Senate races don’t want to deal with in the last week before the election.

So far, at least 13 politicians from across the country, including nine U.S. Senate candidates, are returning questionable campaign contributions after a bombshell report came out over the weekend that revealed a major Democratic donor may have illegally reimbursed partners for campaign contributions.

The Boston Globe and Center for Responsive Politics reported on Saturday that from 2010 through 2014, the Massachusetts-based Thornton Law Firm gave partners bonus checks that mirrored their political contributions, which is a potential violation of federal law.

New Hampshire Gov. Maggie Hassan received about $38,000 from the law firm during the current election cycle and an additional $13,000 during her 2014 gubernatorial run.

According to the CRP, an independent, nonpartisan organization that analyzes campaign finances, Thornton records show that on June 16, 2014, Strouss received a “bonus” of $3,500.

This reimbursement program could violate federal and state laws because repaying donors could hide the actual source of the contributions, allowing them to exceed contribution limits.

In 2016, Thornton Law Firm has contributed more than $775,000 to federal candidates, most of them Democrats, according to the CRP.

Strouss and fellow partner Garrett Bradley, as well as founding partner Michael Thornton and his wife, donated nearly $1.6 million to Democratic Party fundraising committees and dozens of politicians. The Globe reports that the partners received $1.4 million in “bonuses” with more than 280 of the contributions being matched bonuses paid within 10 days.

The top two Democratic recipients in the current election cycle are former Wisconsin Sen. Russ Feingold and Hassan. Feingold received $45,000 and Hassan received $38,000, according to the CRP.

In New Hampshire, the state Republican Party was quick to criticize the “tainted donations” to Hassan during her close race against incumbent Republican Sen. Kelly Ayotte.

Ayotte’s campaign called on Hassan to return the cash.

“This is a troubling pattern that raises serious ethical and legal questions, and Hassan must immediately return this money,” said Liz Johnson, Ayotte’s spokeswoman, in a Sunday statement.

Hassan’s campaign on Sunday said they were unaware of Thornton’s ethical issues, and the campaign is promising to return the contributions. The campaign said it will be returning $51,000, which includes $13,000 from Hassan’s 2014 gubernatorial campaign.

“We had no idea about the practices inside this firm, and we assume that as the Globe reported, none of the other Republican or Democratic candidates who received contributions knew either,” said Aaron Jacobs, Hassan’s campaign communications director, in a statement. “We will be returning the contributions from this firm.”

Feingold also pledged ignorance about the practices and said he would return his campaign funds. He said he met Thornton during lunch at the Boston law firm last year, but doesn’t “know him beyond that.”

Other Democratic Senate candidates said they would be giving the Thornton donations to the U.S. Treasury to help with the national debt. These candidates include Catherine Cortez Masto of Nevada, Katie McGinty of Pennsylvania, Jason Kander of Missouri, Ted Strickland of Ohio, Tammy Duckworth of Illinois, Patrick Murphy of Florida and Michael Bennett of Colorado.

Most of these candidates are in toss-up states where the race is extremely tight, and could ultimately decide which political party controls the U.S. Senate.

Democratic presidential nominee Hillary Clinton also received at least $20,000 from lawyers at Thornton and their spouses and said she would return the money to the Treasury.

But some politicians are not returning the money just yet. Sen. Elizabeth Warren, D-Mass., is a top recipient of Thornton Law Firm money. Her campaign committee and leadership PAC have received $129,520 from Thornton lawyers since 2007, according to the CRP.

But Warren’s office told the Globe on Monday that there should be a legal investigation, and if the donations are found to be illegal, the senator will give the money back.

It’s an interesting position for her to take since she made campaign finance reform a cornerstone of her 2014 Senate bid.

But she’s not running for reelection this year and maybe if she was, she might have quickly returned the donations like her other Democratic colleagues.

Both Granite State delegates have remained quiet on the issue and have not indicated if they would return the donations.

The NHGOP called on them to do so. On Sunday, they released a statement calling on Hassan and Shaheen to return the donations.

“Gov. Hassan and Sen. Shaheen need to immediately return their tainted donations from the Thornton Law Firm or voters will continue to have doubts about their judgement and integrity,” said NHGOP state committee chairman Jennifer Horn.

When asked by NH Journal why the NHGOP didn’t include Kuster in their statement, spokesman Ross Berry responded: “This is a large scandal that is deeply concerning and we are still finding out who took what money. If Congresswoman Kuster took these funds like Governor Hassan did, then she should return the tainted contributions immediately.”

This isn’t Hassan’s first time dealing with controversial campaign contributions, which is something the NHGOP likes to point out.

“Maggie Hassan has a long history of accepting illegal campaign contributions that raise serious questions about her political activity and the integrity of her administration,” Horn said. “In addition to her troubling pattern of illegal campaign contributions, the Governor has become ensnared in a series of outrageous pay-to-play schemes that have rewarded her top donors with lucrative state contracts.”

In 2014, Hassan’s campaign was forced to return $24,000 in contributions from the International Brotherhood of Electrical Workers political action committee that came in the day after she filed for reelection, which exceeds the allowed contribution limit once a candidate files.

While it’s unclear how the Thornton Law Firm campaign donations will impact the election, the National Republican Senatorial Committee went on offense to target Democrats, pushing them to return the donations.

“The Thornton law firm has done nothing wrong and it consulted with an outside law firm and accountant ten years ago when its political donation program — involving the personal funds of equity partners only– was implemented,” said law firm attorney Brian Kelly. “While we see no need to do so, if individual politicians want to return donations that certainly is up to them.”