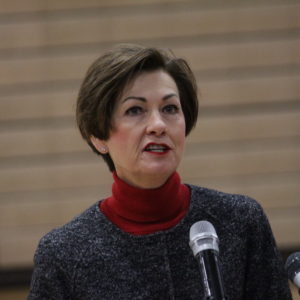 On Monday, it was posted on DHS’s website that those who elected to join Amerigroup after AmeriHealth Caritas announced its exit from the privatized Medicaid system this past October — ahead of the formal termination of services on November 31 —would be automatically enrolled in the state’s Fee-For-Service (FFS) program, Iowa Medicaid Enterprise (IME). Amerigroup, which currently has 186,000 Medicaid enrollees, told DHS that it currently does not have the capacity to take on new enrollees in its current structure.

Reynolds said that “around 9,000 people” in FFS enrollment are temporary until Amerigroup can “ramp up” its resources to take on new enrollees. DHS did not return inquiries about the total number of enrollees who had selected Amerigroup as their MCO and will now temporarily receive FFS.

“We’re in the transition,” Reynolds said. “We signed contracts with two providers, [United Healthcare] is taking the majority of the participants in the interim, until Amerigroup can build up their capacity, which we have every belief that they can.”

The remainder of just one MCO means that enrollees only have one choice when it comes to picking providers, however. Under federal rules and regulations for privatized Medicaid systems, qualifying enrollees must have access to a choice of providers, unless a particular state receives approval from the Centers for Medicare and Medicaid Services (CMS). DHS came under fire late last week after a memo began circulating among administration and legislative officials stating that the state had “received approval” to temporarily suspend MCO choice. DHS has since clarified its memo in illustrating the department’s authorities and responsibilities under the circumstance, and what’s allowable under state law. DHS did not return inquiries about whether or not the state will take on more of the approximately 213,000 enrollees remaining after the AmeriHealth Caritas departure.

Enrollees’ Medicaid benefits will be managed differently — one being FFS under the state, and the other in capitation (paid per enrollee and the services rendered). Typically, under an FFS system, states will simply pay care providers per service rendered, which is what drove Iowa’s spending from $2.4 billion in 2004 to $4.9 in 2015. Reynolds told reporters that the average rate of increase for FFS was 10.7 percent. In a capitation system, the state contributes funds per enrollee to MCOs, who then finance the services, shifting more of the cost burden to the companies. DHS did not return inquiries about whether or not services under FFS or capitation will be equal in quantity and quality.

Since former Gov. Terry Brandstad (now President Trump’s ambassador to China) made the announcement that the state would transition the Medicaid program back in 2015, the program and its administrators have had it anything but easy.

The implementation process was several months behind schedule, finally being handed off to the three out-of-state MCOs AmeriHealth Caritas, Amerigroup, and United Healthcare, in April 2016. Back in August 2016, AmeriHealth Caritas and Amerigroup reported losses of $42.6 million and $66.7 million, respectively, in covering healthcare costs. After one year’s worth of service, the three MCOs collectively estimated a total loss of nearly $450 million. In October 2017, AmeriHealth Caritas announced it was leaving the system after state negotiations to increase compensation for the MCOs failed. The state did agree to a 3.3 percent capitation increase for Amerigroup and United Healthcare.

Still, the Reynolds administration will continue the course.

“This is not perfect,” Reynolds said. “I never said it was perfect, but I will put in the time and the effort to show that Iowans get the care that they deserve in a managed and coordinated and more modern delivery system. I’m not going back.”

As to when Iowans would see their choices again, Reynolds was blunt, saying, “They’re going to have a choice. We’re going to work with them.”

The state of Iowa does have a request for proposal out to accept new providers into the system, however, a new MCO wouldn’t be able to enter the system until 2019.