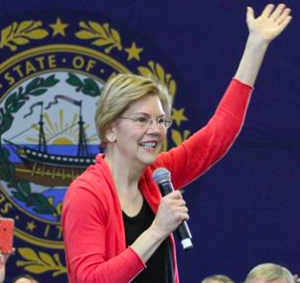 Does Massachusetts Sen. Elizabeth Warren have a path to the 2020 Democratic nomination that doesn’t involve winning–or at the very least, finishing second– in her New Hampshire back yard?  Most political analysts say no.  The Granite State is make-or-break for either Sen. Warren or her Vermont colleague Bernie Sanders.

“With Joe Biden in the race, Warren must Place or Show in New Hampshire, David Paleologos, director of the Suffolk University Political Research Center, tells InsideSources: “A third-place finish weakens her, and gives limelight and oxygen to the candidate who crossed the wire with the two regional favorites, Warren and Sanders.”

Unfortunately for Liz Warren, a third-place finish is starting to look like a long shot.

This is now the third month in a row that finds Sen. Warren, a one-time Democratic rock star, languishing in the Democratic primary polls.  Just days after an Emerson University poll put her in fourth place in New Hampshire, the latest Granite State Poll from the University of New Hampshire has even more bad news.

The top line number is problematic enough: Sen. Warren is stuck in fourth place in the UNH poll as well,  behind Sen. Bernie Sanders, former VP Joe Biden and California Sen. Kamala Harris. But that’s just the beginning of the bad news.

Warren’s support in the UNH poll is down to a mere seven percent, far behind Sanders (26 percent) and Biden (22 percent). Even Harris managed to break into double-digits.

And that seven percent is down from the 17 percent support Warren had in August. In fact, for much of 2018, Warren was polling as the (very, very early) front-runner.  Why? What’s happen?

Since August, the Warren news has been mostly positive. She was re-elected to her Massachusetts U.S. Senate seat in a blow out–a campaign covered extensively by the same Boston media that reaches much of New Hampshire. She had what most observers considered a successful campaign rollout and gave a well-received announcement speech. And she’s announced several high-profile liberal programs like free child care and support for the New Green Deal.

And yet her trajectory has been straight down.  As one longtime Democrat who’s been involved in several New Hampshire presidential races told InsideSources “Warren initially had the momentum. Now I’m not sure she can move forward.”

What happened?  In part it’s the legacy of the scandal surrounding her disputed claims of being an “American Indian,” as she formally declared herself to be in newly-released documents from early in her law career.  Warren hasn’t been able to get past the controversy. She’s asked about it by Democrats at town hall events, she’s taunted over it by Republicans and she still makes unforced errors over it–like her recent announcement that her vision for taxpayer reparations to minority groups should include a conversation about Native Americans.

But even the good news isn’t quite so good. According to analysis by CNN’s data guru Harry Enten, Sen. Warren had one of the worst re-election performances of any senator running for re-election last year.

All of which highlights the fact that Warren’s woes can’t be dismissed as circumstance or the effects of unforeseen events.  She has a well-funded, well-organized campaign, she’s gotten good press and Democrats are getting her message. And they still don’t want to vote for her.

Warren supporters insist that it’s far to early in the process to predict a candidate’s demise, and they point to the campaigns of John McCain in 2008 and Bill Clinton in 1994 as examples of candidates considered DOA but came back–with the help of New Hampshire.

Unfortunately for Sen. Warren, there’s no evidence that she will find that help here in the Granite State.  How bad are Warren’s numbers?

When UNH asked Democrats an open-ended question (no names listed) about who they will vote for in the 2020 primary, more picked relatively unknown Minnesota Sen. Amy Klobuchar than next door neighbor Elizabeth Warren.

And keep in mind that this is where Warren is before Joe Biden gets in the race and before Bernie Sanders starts campaigning. Politics is an unpredictable game, but it’s hard to see a twist in the story that would make Liz Warren a winner in New Hampshire.