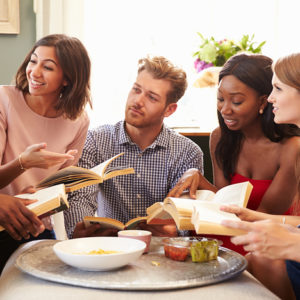 Innovation and Evolution at the Book Club

Fourteen years and 93 books later, our book club has evolved. We began as a group of seven middle-age women, not all of whom knew each other. We tinkered our way to a common understanding of book club etiquette: no new releases that required the purchase of hardbacks, only summer picks could be particularly long, and the start of our get-togethers should begin with informal chitchat.

The last rule was meant for me who would often urge getting to the table shortly after arrival so that we could plunge right into an in-depth book discussion. I was too efficient for our own good until I was reminded by my dear and sensible friend Rhonda, “Could we spend just a bit of time getting to know each other?” I quickly agreed but was unable to shed my market survey background, as I asked if we could still rate the chosen book (we do).

Now that we were on the same page (pun intended), we were sharing all the places 14 years can take you — college applications, career changes, aging parents, vacations, children’s marriages, and the happiest of all topics, becoming a grandparent — while still doing our books justice. We agreed that some mix of classics and contemporary hits would be a smart balance, and we tried not to indulge too much in our gravitational pull toward World War II, a byproduct of our Jewish upbringing.

We even had a moment of innovation when we invited our spouses to join us for a couples’ book night. The evening was a big hit with the men having a lot to say about the read. We are now in our eighth year of “spouse night,” where we combine a potluck dinner, chitchat (they needed to get to know each other, too), and eventually a thoughtful discussion of the book.

Yet even with the small innovation of spouse night, we had to tinker. We learned that unbeknown to us, we were stereotyping the men when it came to our picks. For the first three years the books all had a historical angle. “The Other Wes Moore” explored two men with the same name, similar age, and who had both grown up in Baltimore with similar hardships. One landed in prison, and the other at West Point. It is not hard to imagine a riveting conversation about the whys and whats of this story.

The next pick, “In the Garden of Beasts,” was a historical look at Hitler’s rise to power while the world slept. Again, great conversation ensued.

In the third year, when we picked “Road to Valor,” the men politely rebelled. Evidently a true story about how a cyclist saved Jews during World War II was pigeonholing them as historical factoid buffs and not recognizing their emotional and intellectual range. As one spouse said, “We can do fiction, too.”

We heard them loud and clear, and so the following year, we picked one of my favorite of all novels, Willa Cather’s “My Antonia.” The novel is a slow and tender read about a female pioneer (Antonia) in America’s heartland who braves many challenges while she builds her world of meaning. Of the seven spouses, only one enjoyed the book while the others found it too slow — “like watching paint dry,” as one spouse said.

When tender fiction failed, new rules emerged. The men picked the book for spouse night. Their picks included “The Martian” and Michael Connelly’s “Two Kinds of Truth” (a Harry Bosch novel), which are both action-packed reads where no paint ever dries. In retrospect we should have been able to predict this inclination.

Then in a nod to being complex and thoughtful, they picked “The Immortalists,” and “Big Rock Candy Mountain” (a Wallace Stegner classic).

“The Immortalists” raises the hypothetical question of whether knowing the date of your death would affect how you live your life. Stegner’s book was a vote for an outstanding writer whose title sounded like a fun children’s game but instead portrayed an itinerant family facing extreme poverty and violence as they fight for survival. “Dark” does not begin to describe the book’s haunting tone. We discovered that not all picks can be completely read by a group.

Fourteen years and 93 books later what have I learned? Certainly I’ve benefited from reading books that I never would have picked. One really can’t judge a book by its cover, or even husbands by the stereotypes we place on them. Like most worthwhile endeavors, we landed in the right place by tinkering. The right place, as my friend Julia notes is that, “We have made real connections and laughed along the way.” It turns out that our book club is about books and so much more.